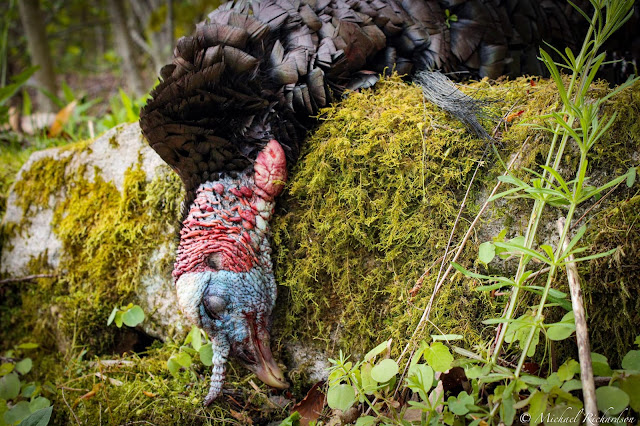 The first week and a half of spring gobbler season was rather rough for me this year. I had spooked a few birds by making rookie mistakes. I was on gobbling birds ,which was a good thing, but my lack of time to scout before the season started was taking its toll on me. Every hunt felt rushed but I was gaining information on the birds in the area every time I was out.

I had missed a nice longbeard the first Monday of the season as I took my head off of the gun to see the shot. I shot over top of that bird and he ran over the hill unharmed. As I walked up to double check that the shot was a clean miss, that gobbler ran back across the logging road in front of me.  After that hunt I quit the subtle tactics of using a stock shotgun and decided to take my fully loaded Mossberg 500. That gun has a reflex sight on it and is bad medicine on gobblers.

In the middle of the first week I went to an old stand by spot.  I didn't hear any birds on my first spot choice so it was already light when I got to my Plan B location. I fired off a few yelps and cuts on my Lapp Shortbox, but did not receive any answers. With only a half hour left to hunt I decided to go down into the small hollow that I have had success in the past. As I was walking down the trail a monster gobbler was running up the trail to get to the spot I had initially called from. We made eye contact and he took off running.

The rest of the week yielded only a few distant gobbles and no birds that I could actually work. 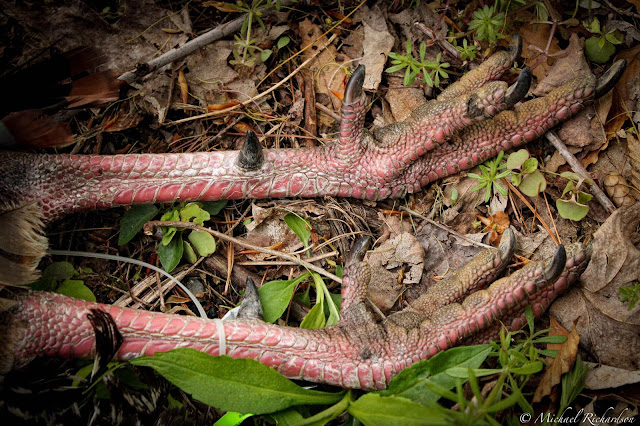 The morning of May 11th, was a chilly one. My Jeep's in dash thermometer read 30 degrees as I was driving in to the woods before work. I headed to the spot that I had spooked the really nice gobbler the week before. As I was walking down the trail that big bird was sounding off like crazy. I planned my set up, plopped a hen decoy right in the middle of the logging road, and let out a few tree yelps. For whatever reason this bird was on fire. I worked that bird for a few minutes but it sounded as though he was going off of the point in front of me.  I had it in my head that this bird was going to work down off of the hill, and I had to make a move on him. I got up, grabbed my decoy, and headed to the point. About 40 yards down the trail that gobbler and I made eye contact yet again, and he just took off flying. These before work hunts don't help with my patience issues while turkey hunting. I decided to just go back to the jeep and get an early start at work but as I was walking out to the jeep  I heard a gobbler going bananas about 150 yards or so from where my Jeep was parked.

I had enough time to work that bird before heading to work so I took off to close the distance as fast as I could. The bird was across a powerline from where I was first set up and this allowed me to only close the distance to around one hundred fifty yards or so. I knew this bird may not be easy to call through a clear cut, across a powerline, and down a ditch ,but his mood made me believe that I could get the job done. I couldn't risk getting busted so I had to stay back a bit to work this gobbler. 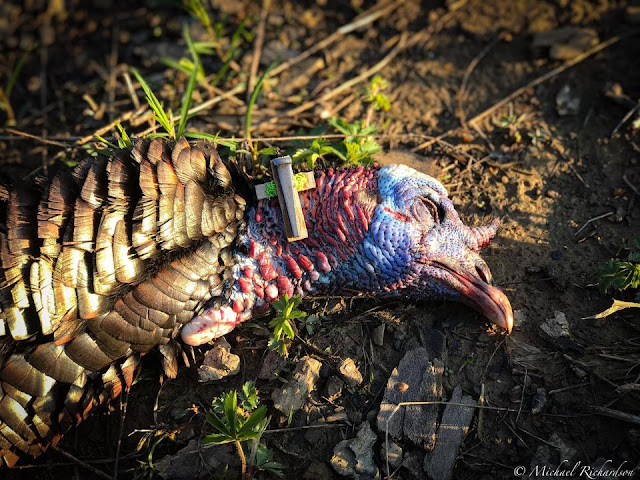 While I was borderline jogging to get to a small meadow just off of the powerline that gobbler must have gobbled 50 times. I was thinking that another hunter may be working him. I got to the meadow that the twins and I had found earlier in the spring. The meadow was loaded with turkey sign at the time and I made it a point to remember that spot.  I set a hen decoy out in front of me and listened to see if I could hear another hunter calling to this bird.  The gobbler made it tough as he was gobbling about once ever 30 seconds or so. I had never heard a bird that fired up before.  I thought that possibly he had a usual girlfriend that was not present that morning. Once I decided that no one else was calling to the bird I started some excited cutting and yelping at him. It was as if his constant "Where are yous" had finally been met with the "Here I am" he was looking for. The bird really went nuts at hearing his girlfriend calling back to him.

This lead to a non stop gobblefest for the next 10 minutes or so. He got to the point that he was triple gobbling and sounded out of breath on that third gobble. "This bird is going to give him a self a sore throat by the time I kill him", I thought to myself. The only issue was that he was hung up at the edge of the powerline. I made him go nuts gobbling, but he still was not wanting to cross out in the open to get to my location.

After giving him the silent treatment I decided I would gobble at him to make him think that another Tom had moved in and stole his lady. I fired off some excited yelps at him and then instantly gobbled on my gobble tube after the last note of my yelp. As soon as I gobbled, he would gobble.  This sequence went on for five minutes or so. Such an awesome hunt thus far but could I seal the deal in time?

After firing him up again I went quiet and so did he. Was he coming in hot, or did he decide that the other bird was not worth the risk of getting beat up for? Just then he gobbled above me and to my left at about 50 yards. I toned down my calling and just let out a few soft yelps. All that was left in my mind was filling out the tag. This bird was going to come right to my hen decoy and get dropped at 15 yards I thought to myself. 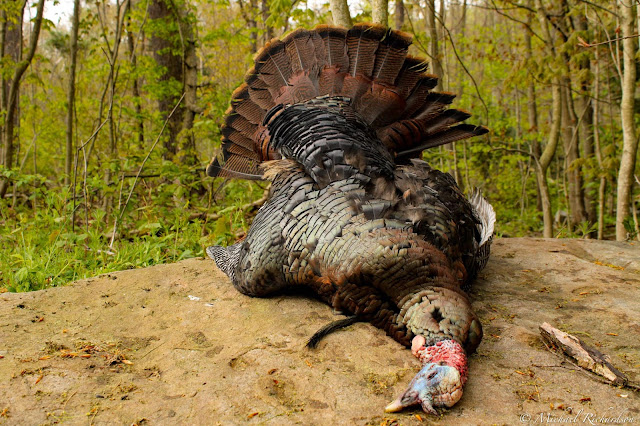 The gobbler had other plans. I had to watch in agony for what felt like an eternity as the "Soar Throat Gobbler" would strut back and fourth at thirty-five yards on the powerline trail. There was a roughly eight foot high ditch with just enough brush in the way that I could not shoot, and I feel made it impossible for him to see my decoy. To make matters worse the bird would turn directly at me and gobble every 45 seconds or so.  Such a rush to just hear the sound I crave all spring so many times and so close.  Now I had a live hen working her way from my left going right too him. This made me super nervous that he would just go off with her and the most exciting turkey hunt I've ever had would be over.

With time running out and a live hen threating to steal my bird, I really poured it on him. I tried to sound like the most eager hen on the mountain. This drove him into another gobbling episode again. Just as I thought he was going to break I could see the hen with him. She and I exchanged a few words, and I assumed my hunt was over yet again.

Suddenly I could hear a vehicle coming up the powerline trail to my left. This could either go really good or really bad for me, I thought in my head. I could see the vehicle through an opening and knew it was a hundred yards or so to my hard left. Just then the hen took off down the powerline. I thought to myself he is either going to fly down the powerline like the hen or try to sneak through the brush and come right to me. When the hen took off the vehicle stopped directly to my left at seventy yards or so.  I was thinking I was going to see a hunter get out and shoot my bird, but I watched my longbeard break strut, flip his wings and sneak down the hill in my direction. My eyes constantly shifted from the vehicle to where the bird was. I knew that I was safe to shoot once the bird hit the flat of the little meadow as the ditch would provide a perfect backstop.

All of a sudden I could see his red, white, and blue head bob into my view at 25 yards. I put my reflex sight on his head and:

Finally after 2 years of tag soup I had a PA public land gobbler flopping. I was pumped and was in just disbelief of the events that had just unfolded in front of me. I have to laugh that these crazy hunts happen to me. To go from spooking one Tom, to lucking into this bird and have another hunter in a vehicle bump him right to me is hysterical.  I would bet the farm that this gobbler would have went off with that hen, if I couldn't pull the hen to me. I can honestly say that the number of times that this bird gobbled before I shot him was more gobbles than I heard in the last three years of hunting. 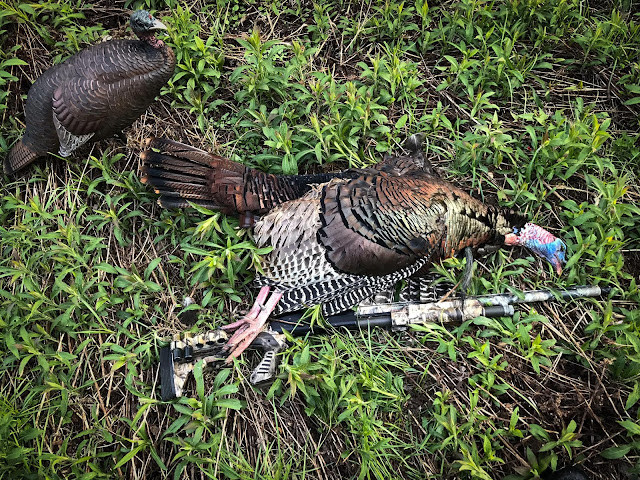 I snagged a picture of the bird as he laid and was just shaking my head at what had just happened. I took a hunt recap video on my phone as I like to do after every kill. It makes for a great thing to watch to relive hunts. I don't know if gobblers can get soar throats like a human but this bird sure gave his vocal chords a work out that morning. To finally punch a tag after eating tag soup for two seasons was a great feeling, and I knew that Corbin would be super excited. 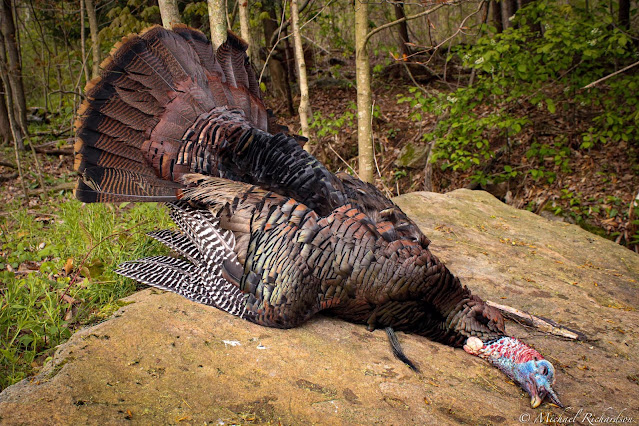 I've shot bigger birds than this gobbler. Gobblers that weighed more. Gobblers with longer beards and spurs. What this bird lacks in trophy potential he made up with on my most exhilarating and heart pounding spring gobbler hunt. I am addicted to hearing the bird gobble, and will admit that sometimes I am guilty of over calling just to hear it. I have to believe that in the 45 minutes or so that I worked this bird he had to have gobbled two hundred times. This chess match was awesome and one I will never for get. To checkmate a gobbler that wanted to gobble as much as this guy was an out of this world hunt and one that I will replay in my mind for a long time.