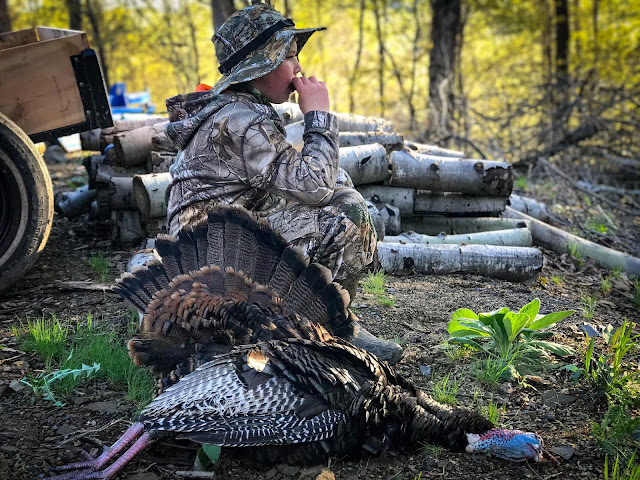 Heading into the 2021 Spring Gobbler Season I felt overwhelmingly under prepared. I had no time to roost any birds and was going off previous years knowledge to make my plans for the season. I would rely on my in season scouting more so this year than any previous season.

The Wednesday before youth day I realized that I could not find Corbin's 410 TSS shells that he uses. I searched the house high and low but could only find one shell. I decided that I would take Corbin out with his 20 gauge to practice with his gun a little more. I took some low brass and high brass shells for him to practice with. He was drilling the targets and was not afraid of the recoil of the gun so I was super pumped for the upcoming youth day.

With high hopes Corb and I went to a friend of mines private property to hunt. My friend was kind enough to let Corbin hunt his property. He knew how hard Corbin had been hunting the last two years, and all of the trials and tribulations that he had faced within those two years hunting public land. We arrived at the property just before grey light started. A gobbler on the one end of the property was already hammering. I decided that this would be the bird we would chase after.

We ended up switching our set up 3 times on that particular bird, but a hen foiled our plans on our third set up. We just ran out of property that we had access to hunt, and with his girlfriend by his side, there was no way we would be able to move that bird from his hen. Corb and I walked back to my friends house and took a quick break. Corbin and I shed a few layers as we had planned to hike to the other side of the property to a secluded meadow, and scout our way in. We came across a decent amount of turkey sign along the way. 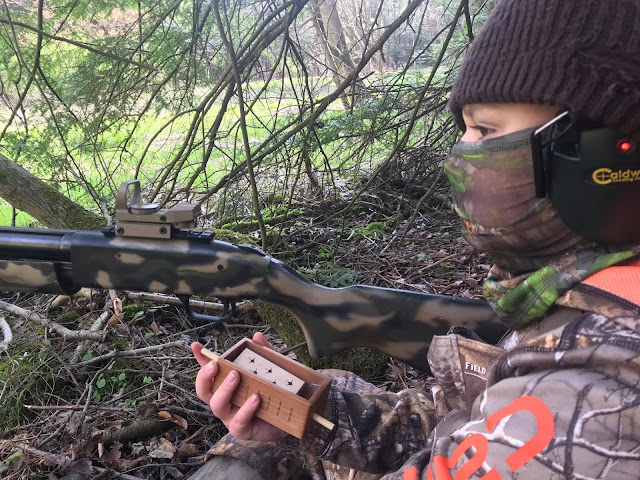 When we got to the meadow Corb decided he was going to call all of the shots. He picked out his "hide", some low hanging hemlock branches with a brush pile behind it. He set out the decoys in the exact spot that a gobbler would be sure to come into. We sat quiet for a little, and he noted that he wanted to do some calling on his own. I pulled out his Mike Lapp push pin call, and he started some excited yelps and purrs on it. Instantly a Barred Owl fires off to our right. Corbin jumped in excitement, as he love owls. He would do some calling and then told me that I needed to join in with him to call and pick a fight with him to mimic two hens squawking at each other.

It was awesome to see how far he had come, and how much he had listened to me over the last two years of hunting when I would explain the why and how's behind my calling methods. Unfortunately for us, we only had a hen answer and no longbeards responded. We left empty handed but Corb was sure that his spot was just the perfect location to kill his first turkey on Opening Day.

Opening morning came and I had barely slept a wink that night. We had really high winds the evening before so roosting the birds was impossible. I told Corb that because of the winds it was likely that the birds would be roosted at the meadow and we may be in some serious business. As soon as we dropped down over the hill from my buddies house a longbeard fired off down by the meadow.

"I heard him Corb, so what do you want to do? Do you want to take the trail over to meadow, or walk down into the creek bottom to get there?"

"I dunno Dad.....I think we better go into the bottom in case he is roosted on Ramp Flat."

So we took off for the bottom, and were on our way to the meadow. When we got to about 70 yards away I told Corbin that we were no longer going to talk until we got set up at his spot. I told him that I would put his decoys on the exact spots he picked last week. I set up to Corbins left to try and help shield his movements to the birds. I set the decoys and sat down with him.

The longbeard was roosted no more that 40 yards away in the pines on the ridge just above the meadow. It was just a little past grey light so I gave a couple light tree yelps. The gobbler turned our way and hammered again. "He knows we are here Corb, That's the last time I am going to call until his feet are on the ground." A few minutes later a hen started to call around 100 yards away. "Dad, you better call so that hen doesn't ruin our hunt," Corb whispers. "Corb, The more I call to that gobbler the longer he is going to stay in that tree," I whisper back. Corb just nodded, and sat back down. The hen calls again a few minutes later. "Dad, please call, she is going to pull that gobbler away!" He eagerly replied as she finished her last tree yelp. I didn't mention it to Corbin but I heard a group of jakes roosted above the meadow on our walk in. I didn't want to call and have them come roaring in and skip the hen the gobbler had heard.  I had called light enough so only the longbeard would hear it and at that point the jakes had not sounded off.

"Corb, are you ok with shooting a Jake or do you want to wait for that longbeard?"

I did a fly down cackle with my MAC slate call and all three jakes let out thunderous gobbles. It sounded like the crowd cheering at Beaver Stadium in the quite morning. Corbin nearly jumped out of his skin. "Dad, there are other Turkeys on the hill" "I know Corb, Keep your head on that gun." I knew those jakes were going to come in and a few seconds after my fly down cackle they were on the ground and coming in hot. I let out a few excited yelps and cuts and they were hammering. I would say I was overcalling a bit but wanted Corbin to experience the excitement of fired up gobblers. About 2 minutes later I could see them pretty much running into the creek bottom.

"Corb, they are directly to my left, don't move a muscle. Once they see that Jake decoy they will come over."  I never called again, but the jakes slowly walked in front of me and were getting ready to cross the stream. "Corb, they are going to come up right behind that grey brush pile, get your scope right on the Jake decoys head and get your safety off" And just as I said they both came in. They had their heads lifted in the air, and ready to fight the decoy.

The birds kept walking in front of each other. The smaller of the two jakes was clear.

"Corb, Shoot the one on the left."

"Corb the gun won't kick you too bad just shoot him."

In his excitement and bracing for the shot Corb must have pressed the slide release button on his Mossberg 500 and the slide was open a little, disengaging the trigger.

"Corb, its the pump, slide it forward a little but don't take the sight off of his head."

Corbin handled this like a pro and lightly slid the pump, when it broke it clicked. The bigger Jake then attacked the decoy. After his round house kick he posed, wings down, and head raised in a defensive position.

Corb's Shot hit its mark, and the Jake never even flopped a wing. He straight leveled him with his Mossberg 500 20 gauge loaded with Federal TSS #9's. 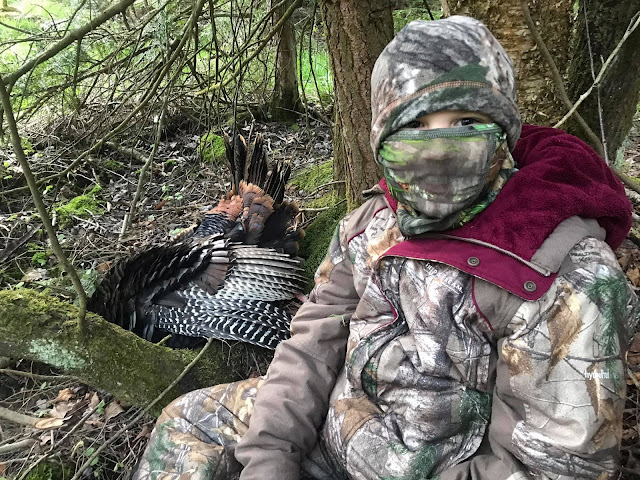 "Yeah buddy! Give me your gun in case that longbeard comes down."

At this moment he was crying tears of joy and I knew that this private land gobbler in the tree to my left was not worth missing out on my little buddies first turkey kill. "Forget that gobbler, Corb lets go get your turkey!" 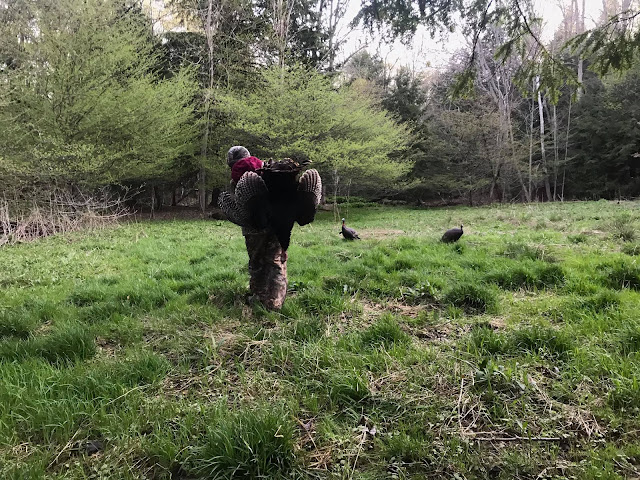 Corbin and I were both super pumped for him to finally put a tag on a turkey. He has hunted very hard over the previous two years but something always went wrong. Corb wanted to film a recap video for his YouTube channel, and get a few pictures. We made a quick escape from the hidden meadow back to my buddy's house to hopefully make it in time to show him Corb's turkey. My friend was very happy for Corbin and gave him a congrats. Corbin then wanted to show a few other family members while his sisters were still sleeping. 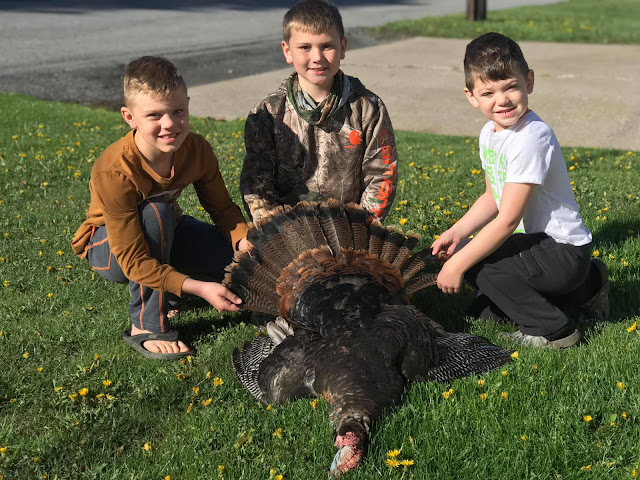 This hunt will forever be etched in my mind. This hunt really got Corbin hooked on turkey hunting. He always liked hunting turkey but after finally having a plan come together without something or someone messing it up really planted the seed. He is already talking about hunting turkeys in the fall. I put together a mount on Corbin's jake and it now resides on his wall, and am going to have a good buddy of mine make a nice wingbone call from one of his Jake's wings.  After I try a few wingbones myself, Corbin is going to try to make a call from the other wing from his Jake. Corbin also wanted to save the primary wing section of his Jake to make a fly down call as well. I have made a lot of hunting memories over the years but it will be really hard to beat Corb's First Turkey.