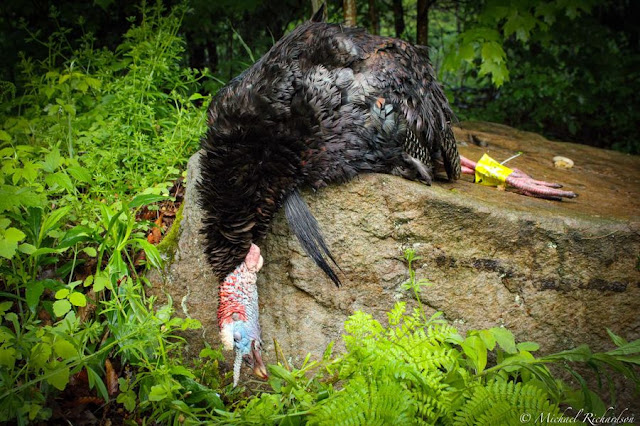 The 2021 Spring Gobbler season was one full of hit or miss gobbling activity and gobblers that would not roost consistently in the same roosting locations.  One thing that was consistent in my season was one gobbler that I would bump leaving from a before work hunt, or spook if I was changing locations or had a late start to my morning. I took note of this bird in week one after a foiled hunt. This gobbler played the game a few times and I had only heard him gobble one day all season.  For whatever reason that morning he was not with his hens and flat out gobbling his head off.  For the life of me, I could not picture where this bird or his hens were roosting either which really complicated things.

One morning I saw this bird standing in a wide-open field just off of an off-road trail. He and his group of hens crossed the road in front of me without a care in the world into a smaller piece of thick woods. I took a mental of this. I would say this scene replayed itself at least three times in week one of the season. I decided after shooting my first gobbler of the year that I would attempt to kill this old bird. I set up to where I thought he would walk past and never laid eyes on the bird, and never heard him gobble. This was going to be one tough bird I thought to myself. 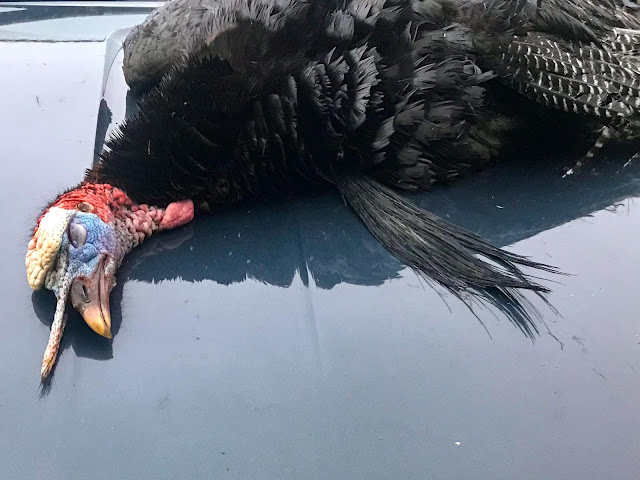 Week three was rough for me. I received my first Covid-19 vaccination and it put me down for the count. I missed two mornings due to being sick from the shot. I felt better on Friday and decided I would try and kill this gobbler. I set up at the same spot as last time and heard a small group of gobblers sounding off around two hundred yards away. These were the first gobbles I had heard in week. I was led with the dilemma of chasing after these birds or hanging tight for the smart old bird that wouldn't gobble. My lack of patience got the better of me and I decided to chase the vocal birds. The birds were answering my call, but I knew for sure they were not coming my direction. I decided to not call and had a plan in mind to get to these birds. I closed the distance to roughly one hundred yards when I could hear a box call in the woods above me. I knew this hunter was completely out of position to kill these birds but decided I would just turn around and head out for the morning. I was really struggling to make it back to the Jeep because of the lingering side effects of the vaccine. I was kicking myself for leaving my first set up. I could only imagine that the smart old bird had saw me when I shifted locations. 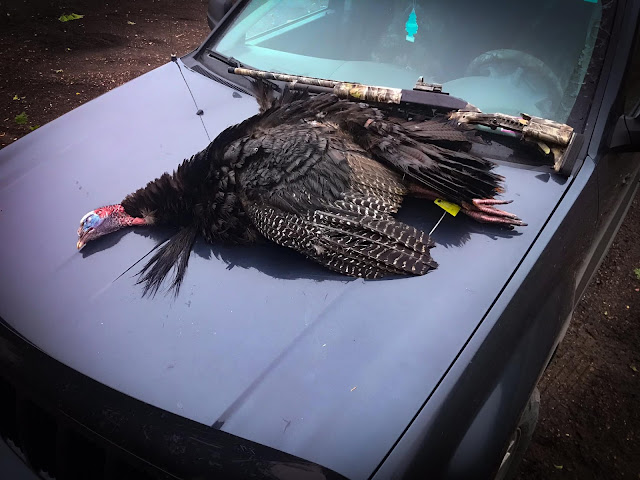 It was getting down to the wire for me on the last week of the season. I stayed out of my main hunting area in the mornings on Saturdays as the area receives a lot of hunting pressure.  I could only hope that no other hunters were on to my target gobbler. I wanted him bad. I tried a few other areas and came up empty handed. It seemed as if the hunting pressure on the State Game Lands near my camp was even worse than my favorite hunting areas. On the morning of May 26th, I decided it was going to be the day that the gobbler that had been driving me nuts was going to die. As I walked to my Jeep, a gobbler sounded off behind the house. I jetted up the hill to where I thought for sure he would be and got within 35 yards or so of his roost. I did some light calling and he answered every time. He flew down and went the exact opposite way. I never heard him fly down, either. I ran as fast as I could up the mountain to try and cut him off. I hit a logging road that I thought he was on and called him back to around 30 yards, but he took a 90 degree turn out to a clear cut that would make him nearly impossible to kill. I gave it a shot but figured I would end up spooking him and decided to go back to the house. That evening a storm front rolled in, and heavy down pours were present all evening. I figured the conditions would be perfect for the big silent bird. I knew he would hit the field to dry his feathers.
I went to bed early that night to be sure I could get up early to try and seal the deal with only a few days left of the season. I woke up early and was ready to roll after the Tom that had been giving me fits all season. I'm not sure why but I decided to fire off an owl hoot by the house to see if the gobbler from yesterday would sound off. I am not the best at hunting silent birds. After my owl hoot yielded no answered I figured it was the time to chase my "Unicorn Gobbler" that seemed unkillable. I parked at my normal location and quickly took off for the exact spot that the hen and tom had crossed the trail in front of me back in week one. I sat down with my back against two smaller trees and decided that I needed much more cover than they offered. I hunkered down into a thick bush and kept another bush directly in front of me. I had a small window that I could look through. If the
Tom did what he did before I would have to let him walk past me. It was going to be an up close and personal hunt that morning.
As it got lighter, I heard something go across the trail to my left. I could hear the shuffling of some larger rocks and knew it had to be a deer. I am thankful that I had the wind in my face that day as the large doe had no clue I was there. As she walked in front of me at roughly eight yards she would look back at the road. "Oh boy, she may be watching the Unicorn Gobbler coming down the road," I thought to myself. As the doe fed along suddenly a hen popped into view right where the doe walked in front of me. I just kept my shotgun held right on the spot the hen just walked.
"FFFFTTTTTTTT!!!!"
The old silent Tom was spitting just to my left and he wasn't on the trail but was walking in the grass adjacent to the trail. I had my gun where the hen was, and he was to my left at a mere two yards. I could see his bright read head through the little opening in the bush. He was close enough that I could see his pupils. I am not sure if he picked my eye movement up or not, but he started cocking his head, and wing flipped and walked off of the trail. I eased my body out from the bush.  I didn't have my gun fully anchored into my shoulder but knew the gobbler was about to get out of there. I put the circle of my reflex sight on his head and pulled the trigger.
"BOOOOOM!!"
My Mossberg 500 rang out into the field and echoed throughout the valley as it decked me from not being properly seated in my shoulder are. The old silent Tom was down.
"YESSS!" I exclaimed. I walked up to the tom and had an overwhelming feeling of excitement.  All of the early morning chess matches were over. It is such a bittersweet moment for me to fill that second gobbler tag. It means that my season is over. I looked at the gobbler and was just taken away. His wings had an noticeably dark coloration to them. I check out his beard and was happy to see it would be the longest beard I had ever gotten and appeared to be just shy of 10". I check his coal black spurs and they looked to be that of a three-year-old gobbler. Such an absolutely perfect gobbler to end my season with. When I picked him up I knew he had a little more weight to him than my first bird of the season. 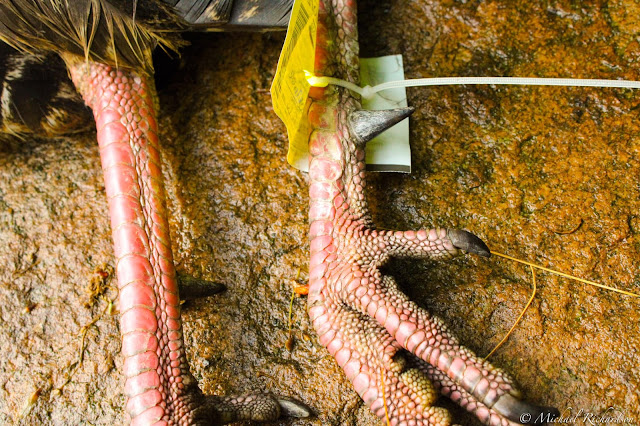 Before I left the woods, I sent my wife a photo of the bird. I think she likes seeing that photo more than any other. It is a lot for a turkey hunters' wife to take when the only thing their husband can think about is turkey hunting before and during the season. I brought the Tom home and got some nice photos of the bird to remember him by. He was pretty wet from the rain the previous evening, but I managed a few good photos. My favorite photos to remember hunts by are what I call "PJ Hero Shots". I live for those before work hunts and trying to hunt every day of the season I can. I love getting to go in and wake up my best buddy and tell him "Daddy got a turkey," and see his face light up with excitement. 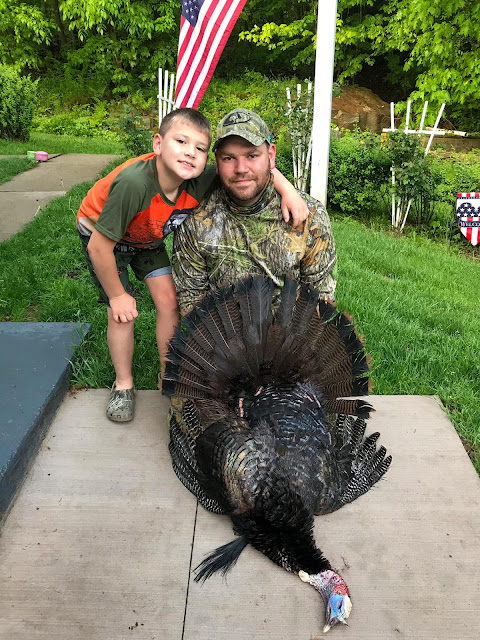 When Corbin came out to check out the gobbler, he noted how much bigger this bird was than his, as well as the first gobbler I shot of the season. He told me that he should have waited for longbeard. I told him that it's all about the hunt, and he needs to be proud of his first turkey.  Corb told me he is going to wait for a longbeard next spring, but we shall see.
For me, my 2021 turkey season was my best ever. I got to call in Corb's first turkey. I was blessed to take a nice loudmouth two-year-old that gobbled his head off to my call in the beginning of the season and then capped off the season with what could be my best gobbler yet. As I sit here and finish this post, and relive my first late season gobbler, I can only hope that the 2022 Spring Gobbler season is as good as last year.
at February 20, 2022