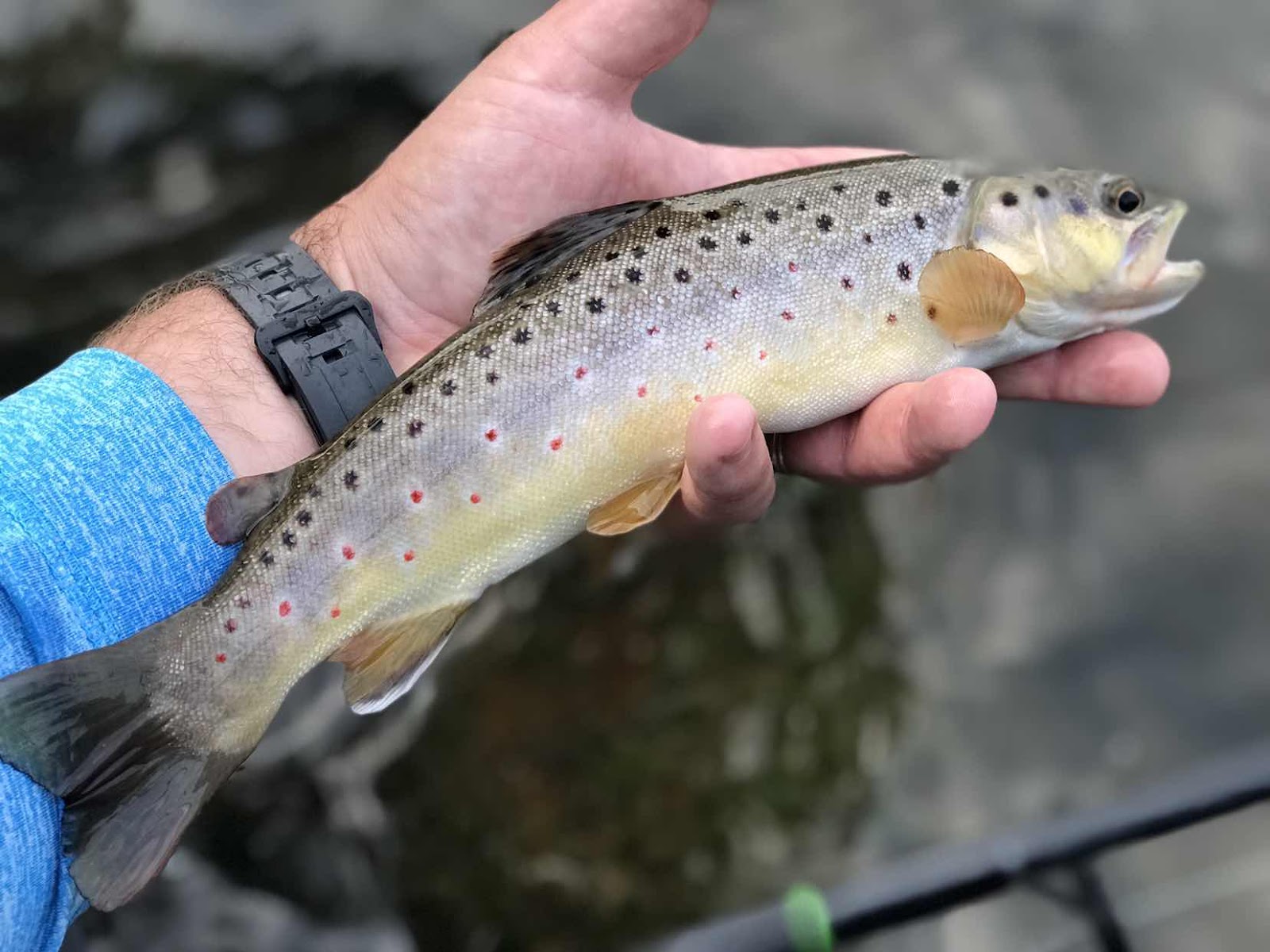 Wonderful morning in central PA. We were out on the boat all day yesterday with the kids and by 9:00 I could barely keep my eyes open. I hit the hay and set the alarm for 4:00 am. I was up and out the door with enough time to see this beautiful sunrise and a had few whitetail deer observed me as I put on my waders. 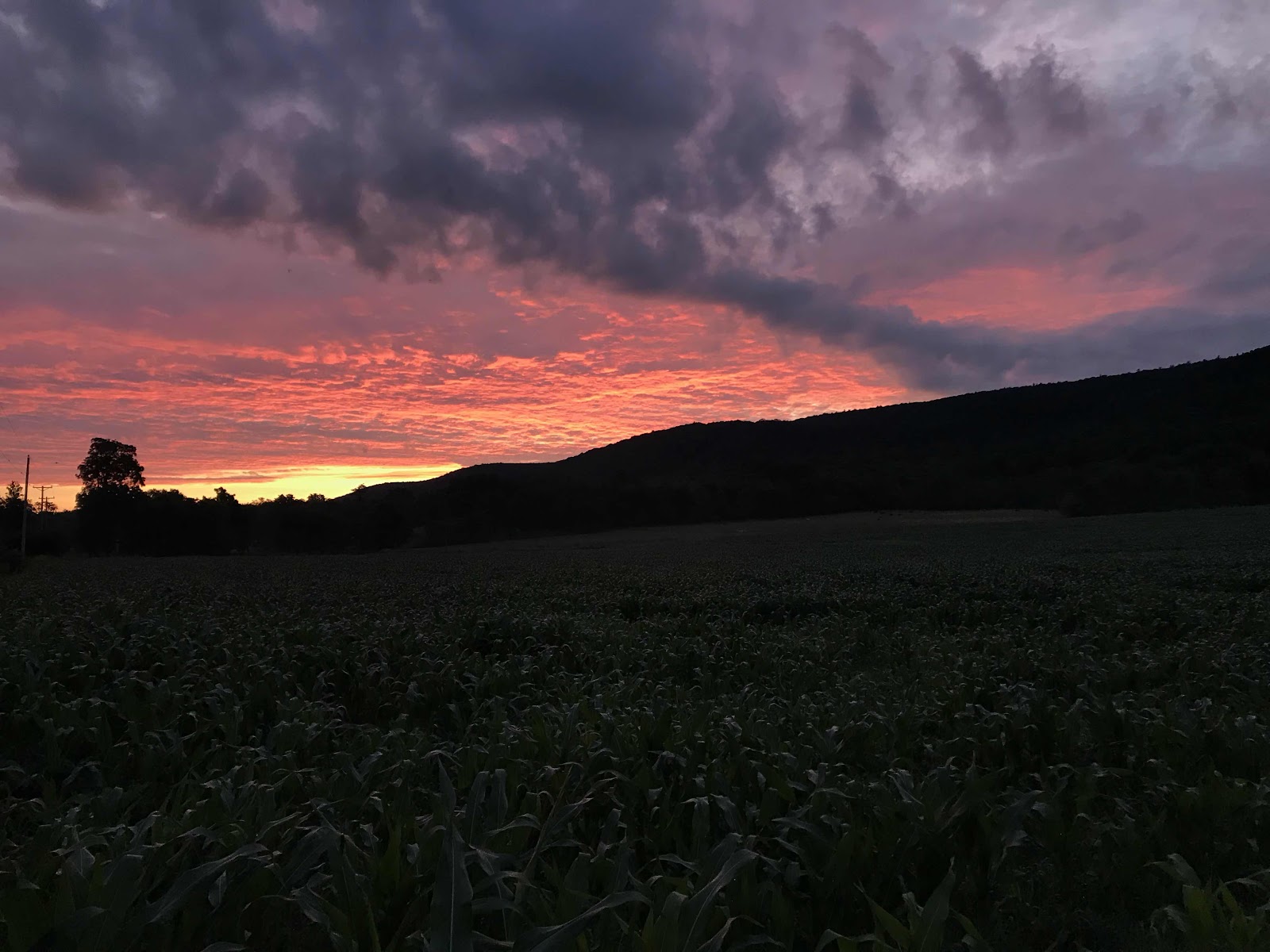 I was excited to fish a stream I hit up last week but farther up as I ran out of time the last time I had fished it. The temperature on my car read 58 degrees, and the dew soaked my waders before I could even get into the stream. A few roosters were crowing in the farm close to where I ceased my adventure last week. The stream was a little lower this morning, but still held a bit of that green shade that we all hope for. 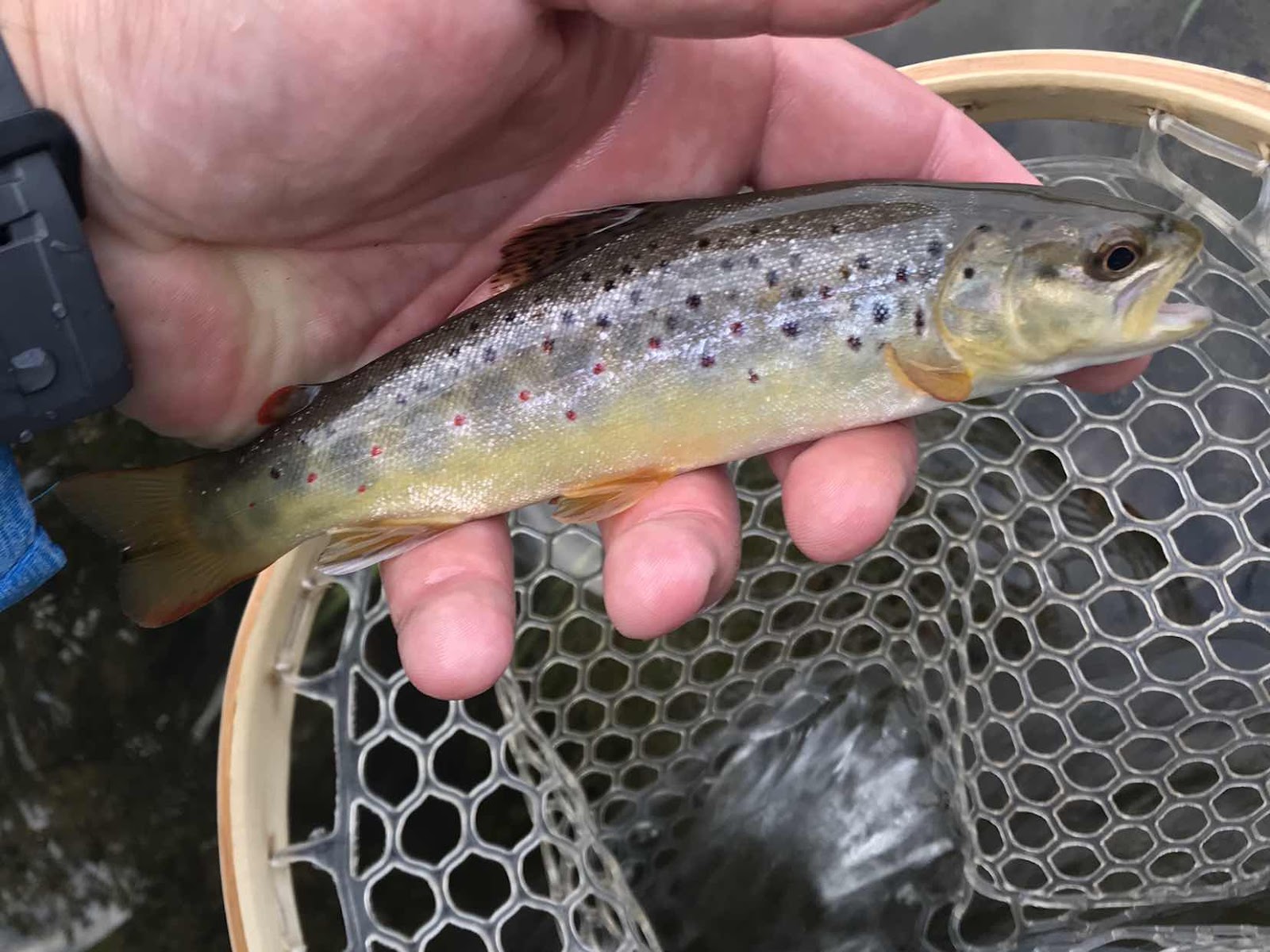 I made my way up stream anxious to see if my new higher speed reel would make any impact on the effectiveness my angling. This stream has a lot of slower semi-deep riffles with quite a few deep pools at the curves. I did back track about 60 yards from where I cut out last time to fish a run that I got snagged and alerted all on my last trip. 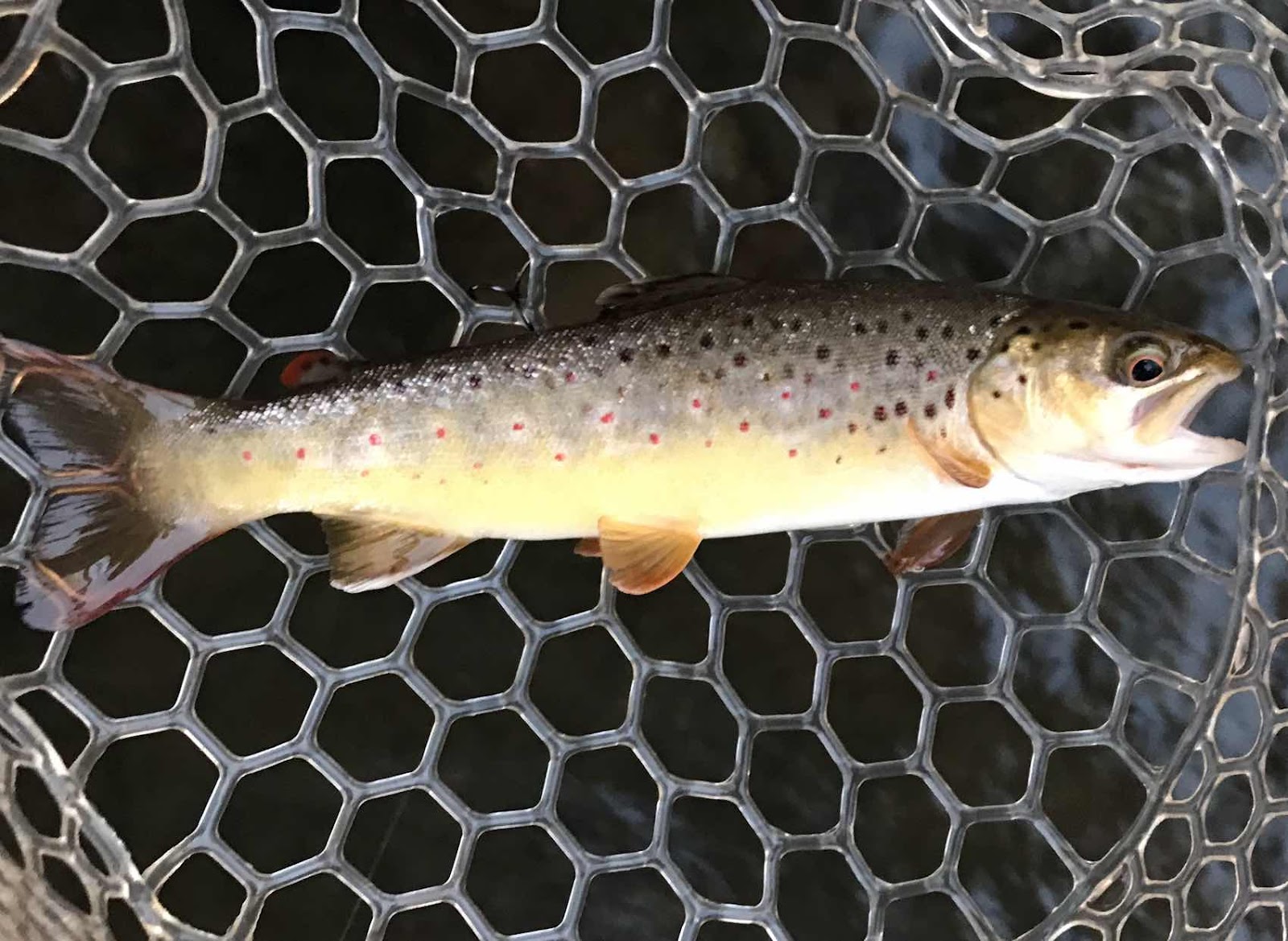 My first two fish were small wild browns. Feisty and beautiful little creatures with an appetite. They hit the spinner hard but were quickly brought to hand. 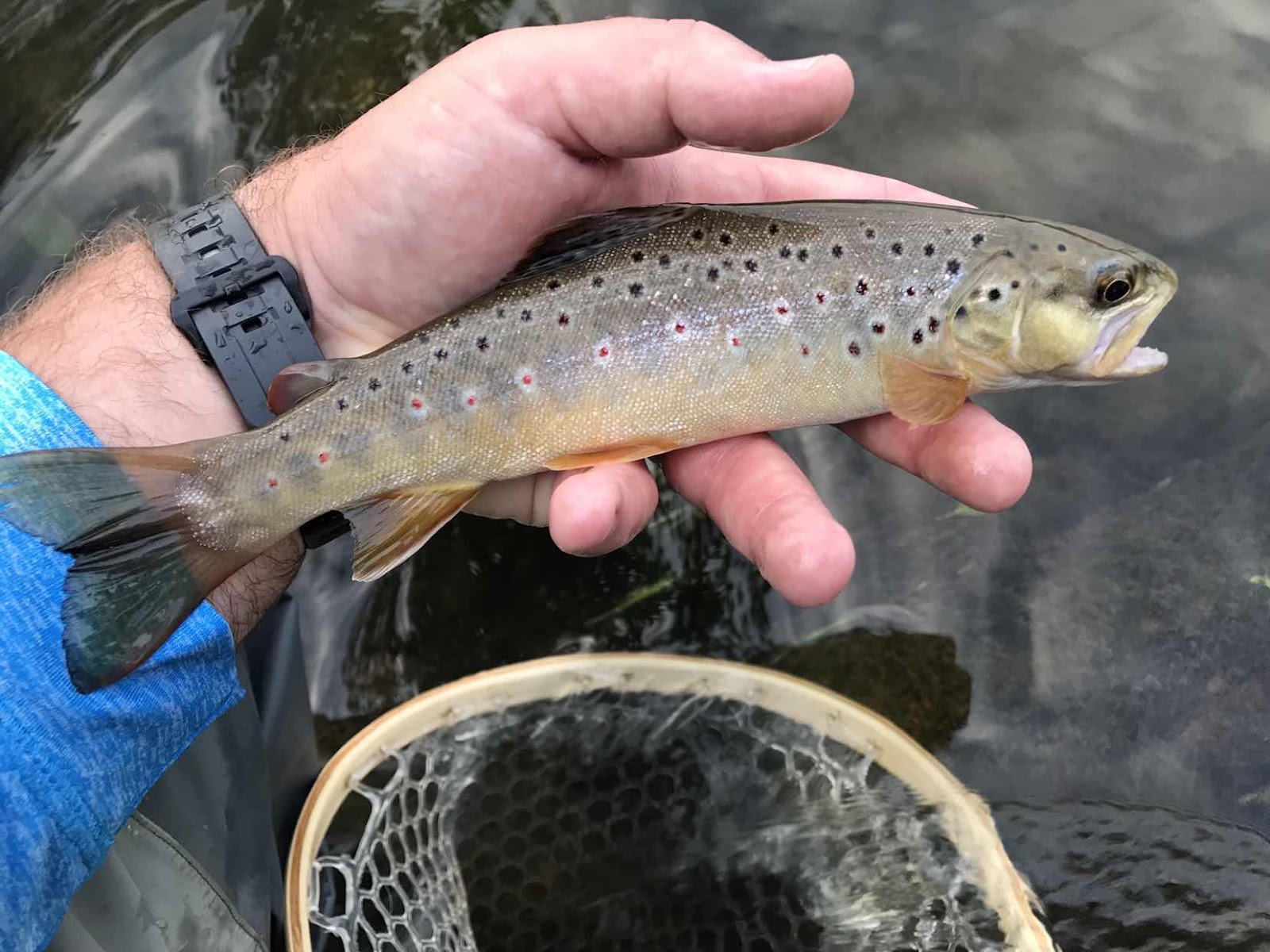 I continued up stream landing a few more wild brown trout along the way. I came to a curve in the stream that just looked super fishy. My first cast into this pool I felt a nice hit but missed the fish. I cast out again and soon saw a darker trout chasing my spinner. He looked like a cheetah chasing a newborn gazelle as he darted from left to right following my offering. A quick wack and I had him on my line. 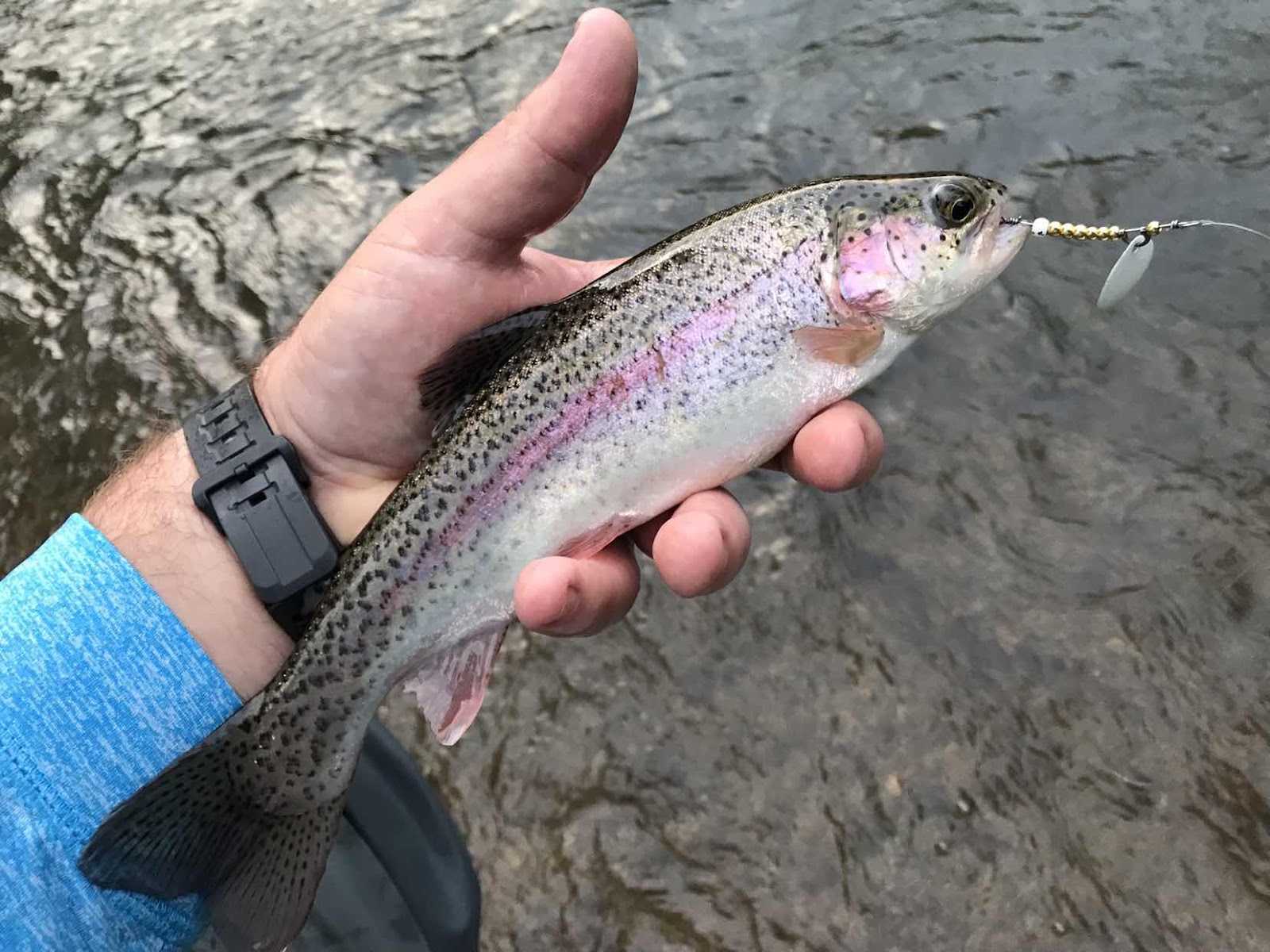 When I brought the rainbow in I noticed his dorsal fin had a bright pink accent. 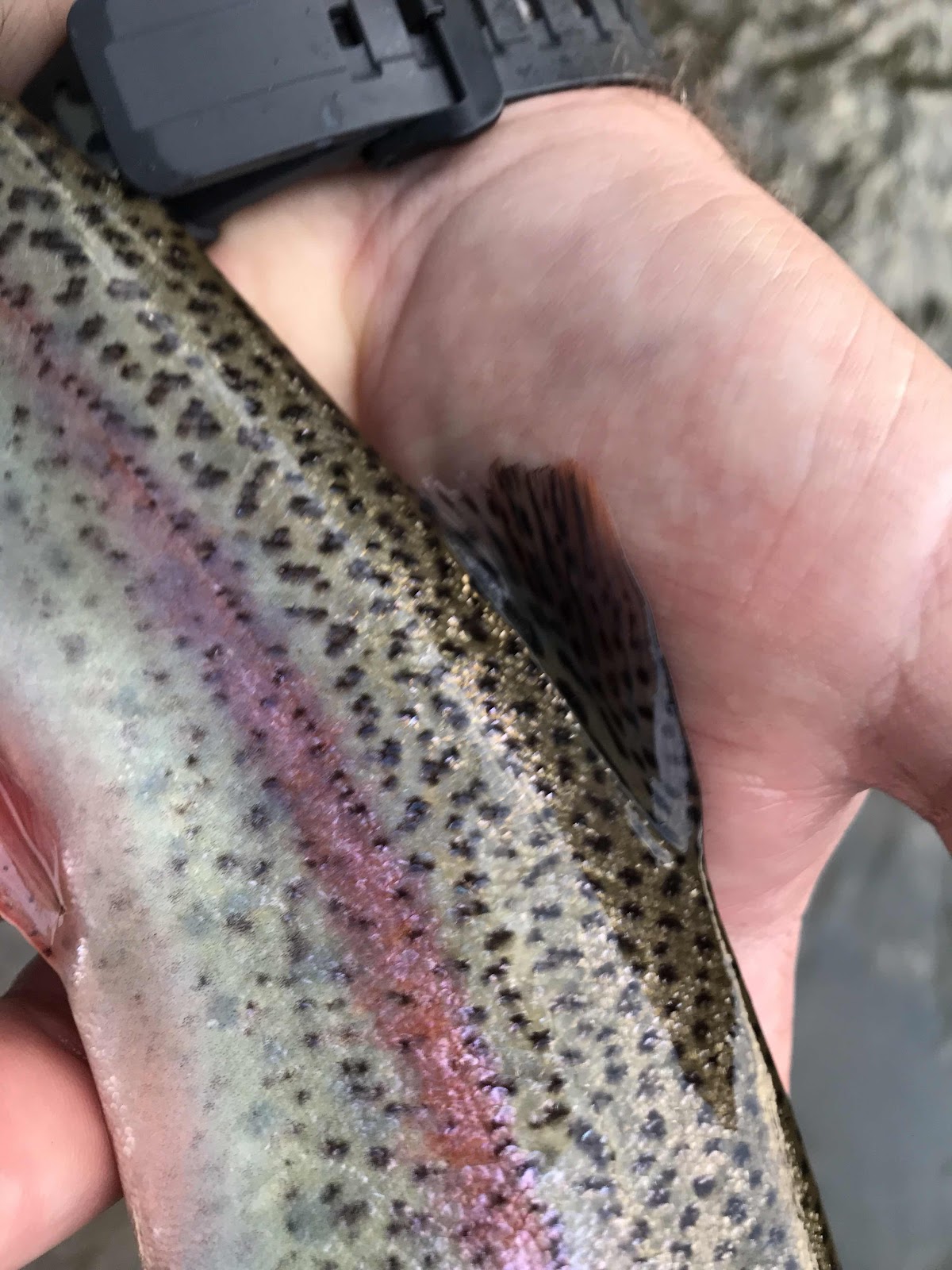 My next cast into the pool I felt a strong tug and was hooked up to a hefty trout. The fish peeled a bit of drag as he made his runs. This guy was a chunky stocked brown that appeared to me to be a hold over from last years stocking. He is was what I like to call a “wormy” brown as his spots had a look of vermiculation that resembled the marks left behind on bark from worms. 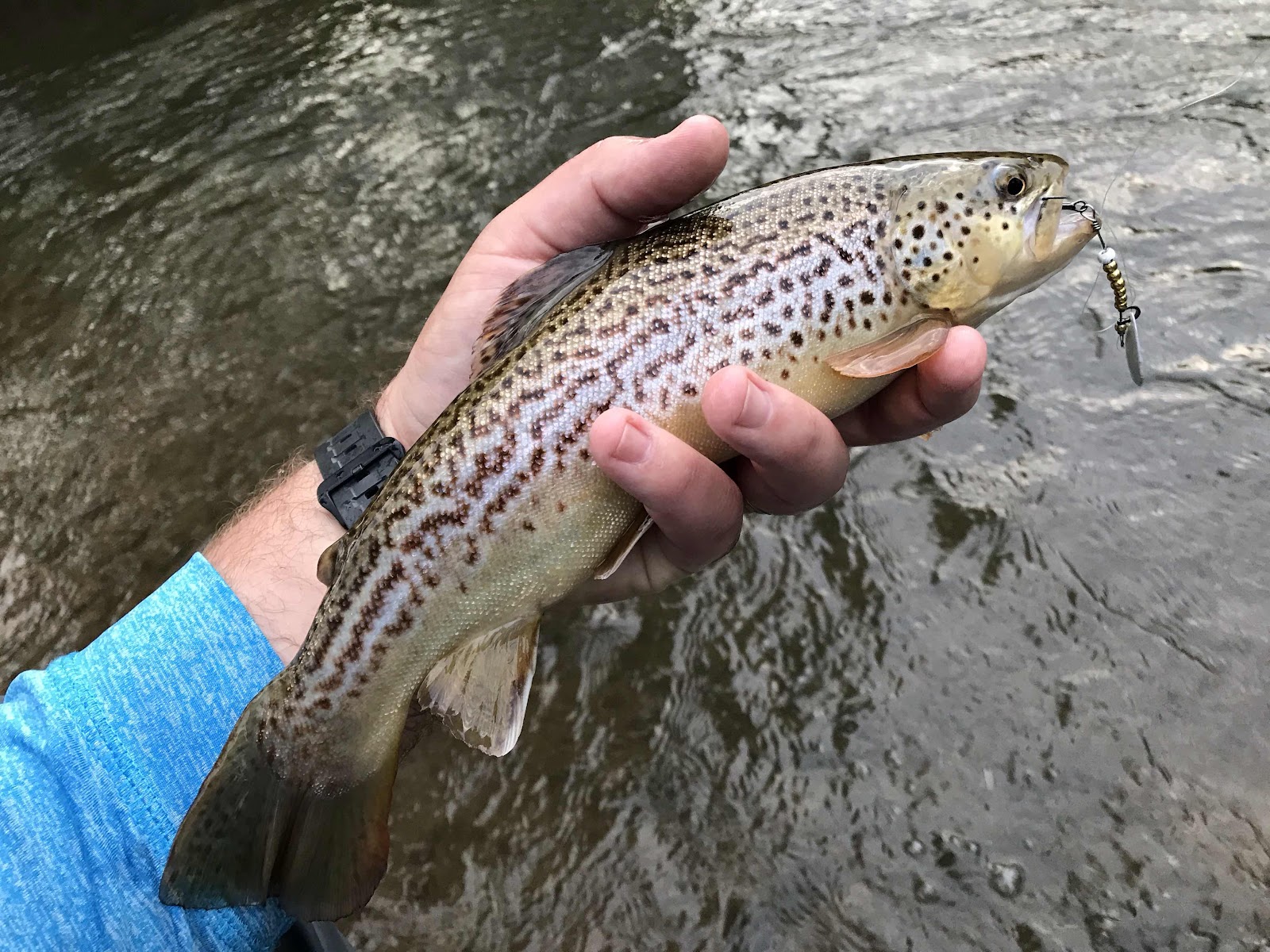 I made my way up stream to a longer run with plunging banks on each side. I was reeling in my spinner on the left side and had a little hit. I cast to the right side and landed a stocked brookie who looked to be pretty healthy. When I picked him up to release him I noticed the firmness of his body and he had quite a bit of strength and he left my finger tips. 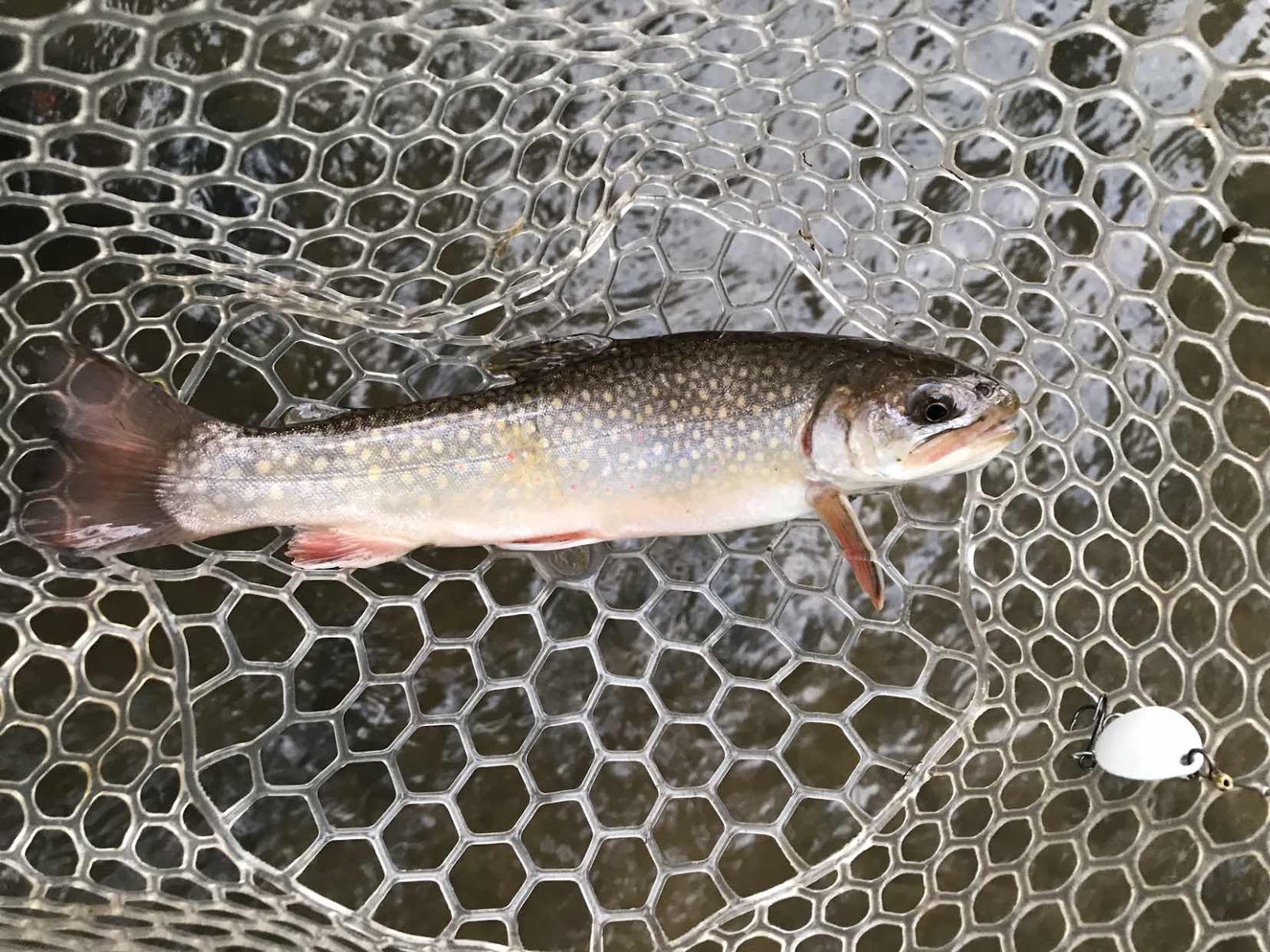 I continued upstream and found what looked to be the best looking pool of the stream. It turned out my thoughts were correct as I landed 4-5 wild browns from this pool. One of these browns appeared to be a nice buck with darker orange sides. He fought like crazy and tested the drag on the new reel. 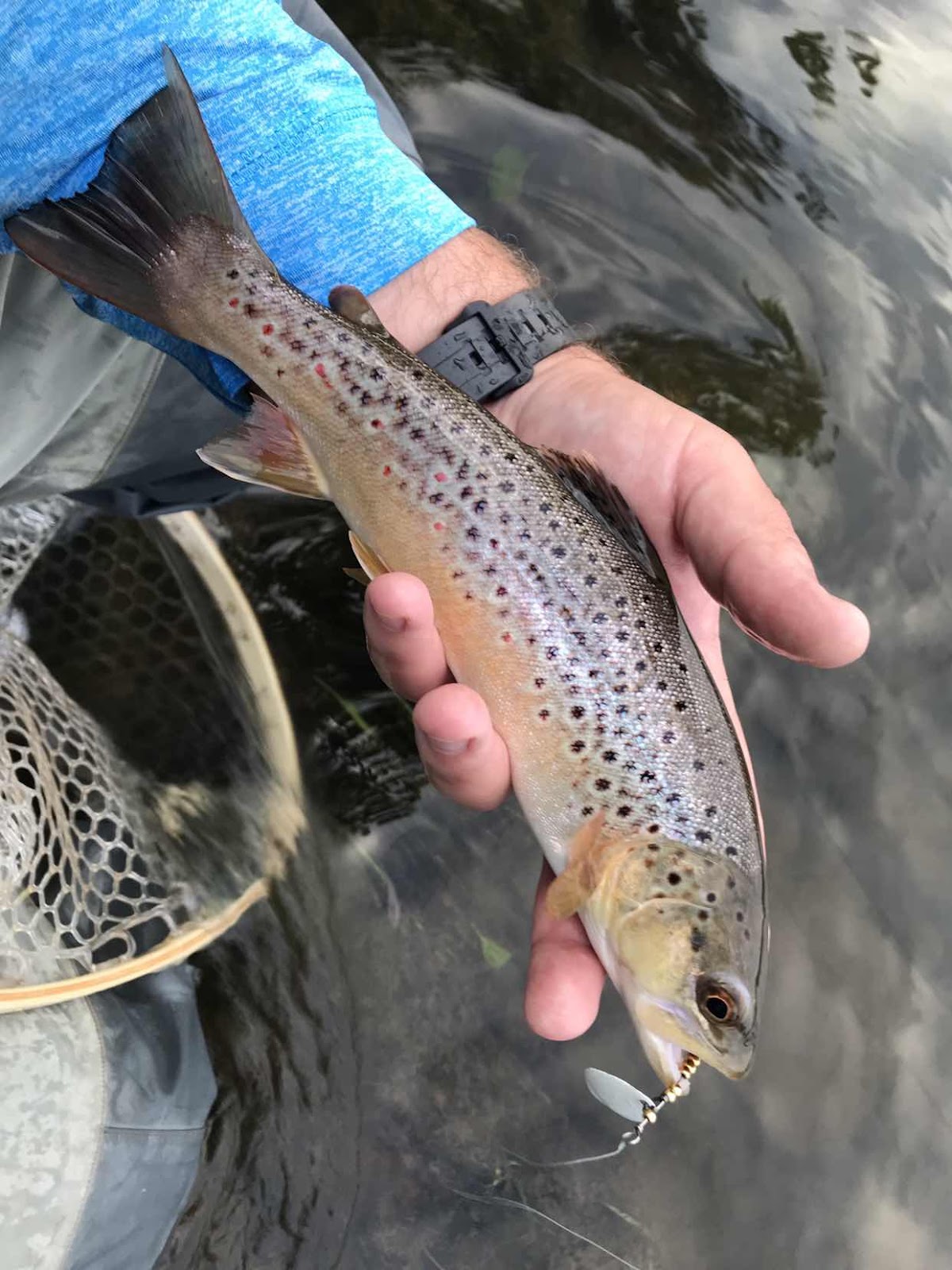 I worked upstream until I noticed a few electric fence wires to keep the livestock in the pasture. This would mark the end of my journey up stream. I walked back down steam to try and hit a spot that I could not fish very well while fishing upstream. I flipped my spinner and worked it into the slower side of the pool. I held my tip low to keep the spinner down and felt a hard pull on my line. My last wild brown for the morning was in my hands. I decided to end the trip there and head into work early. 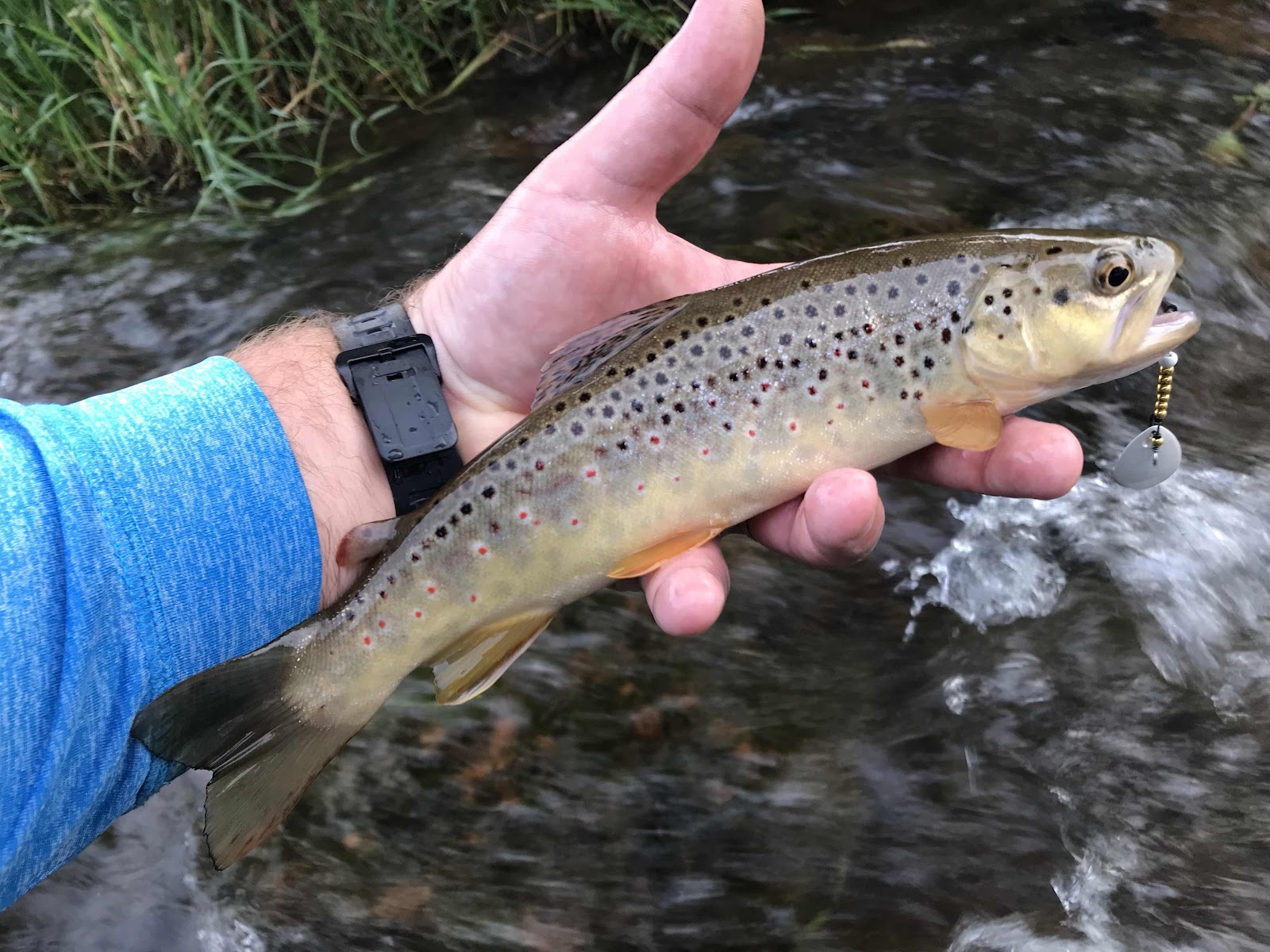 Such a great morning and nice mixed bag of fish to hand. Of course the wild fish took precedence to me over the stocked fish but when the stocked fish have been in the stream a while they start to take on some pretty colors and their tattered fins begin to heal. 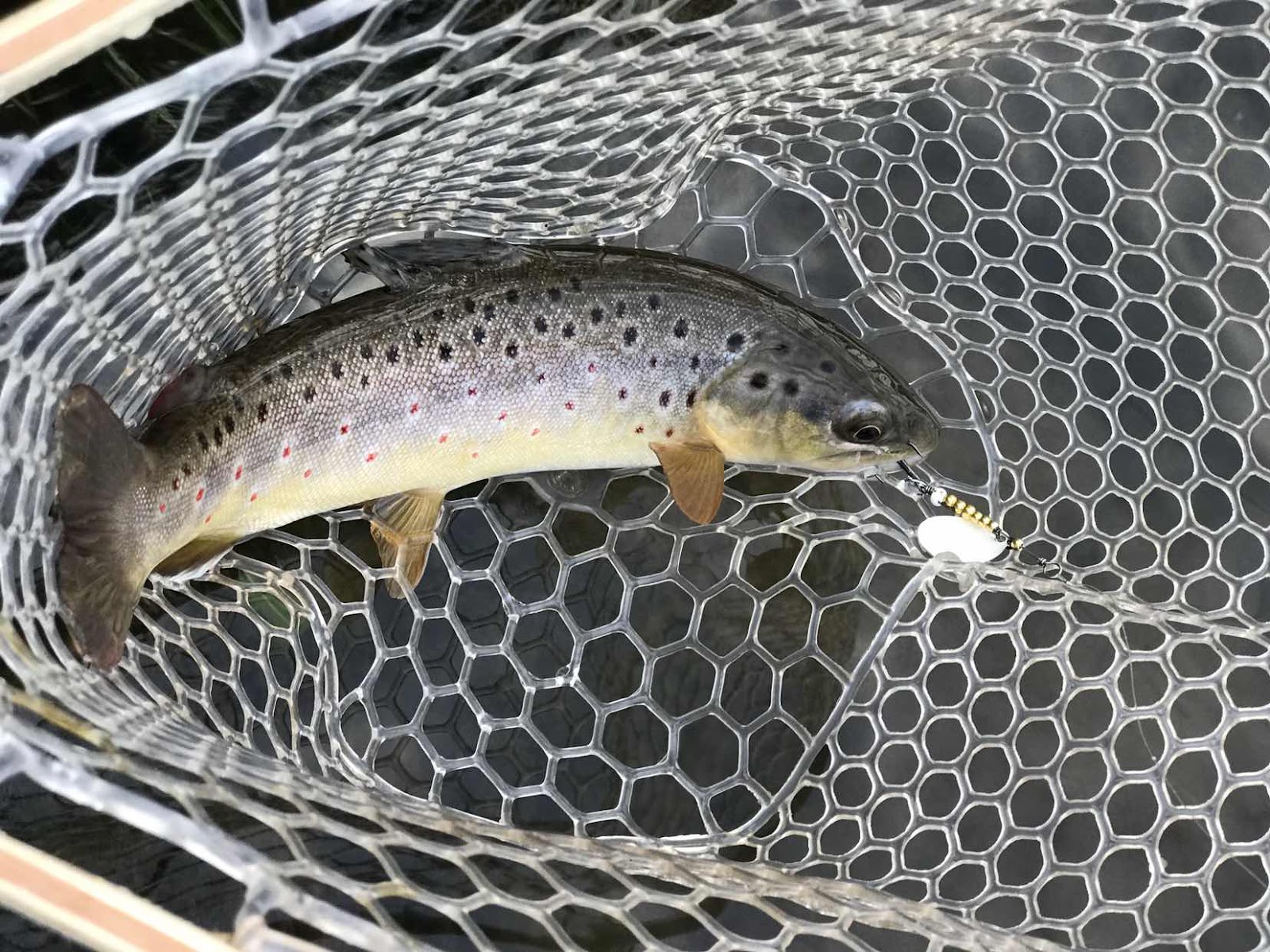 A lot of people complain about the state stocking small fish, and that the streams are all fished out by Memorial Day, but if you get out and explore you can find many fish that have never seen the inside of a stock truck. Great morning and heck of a way to start my Monday.
at June 24, 2019