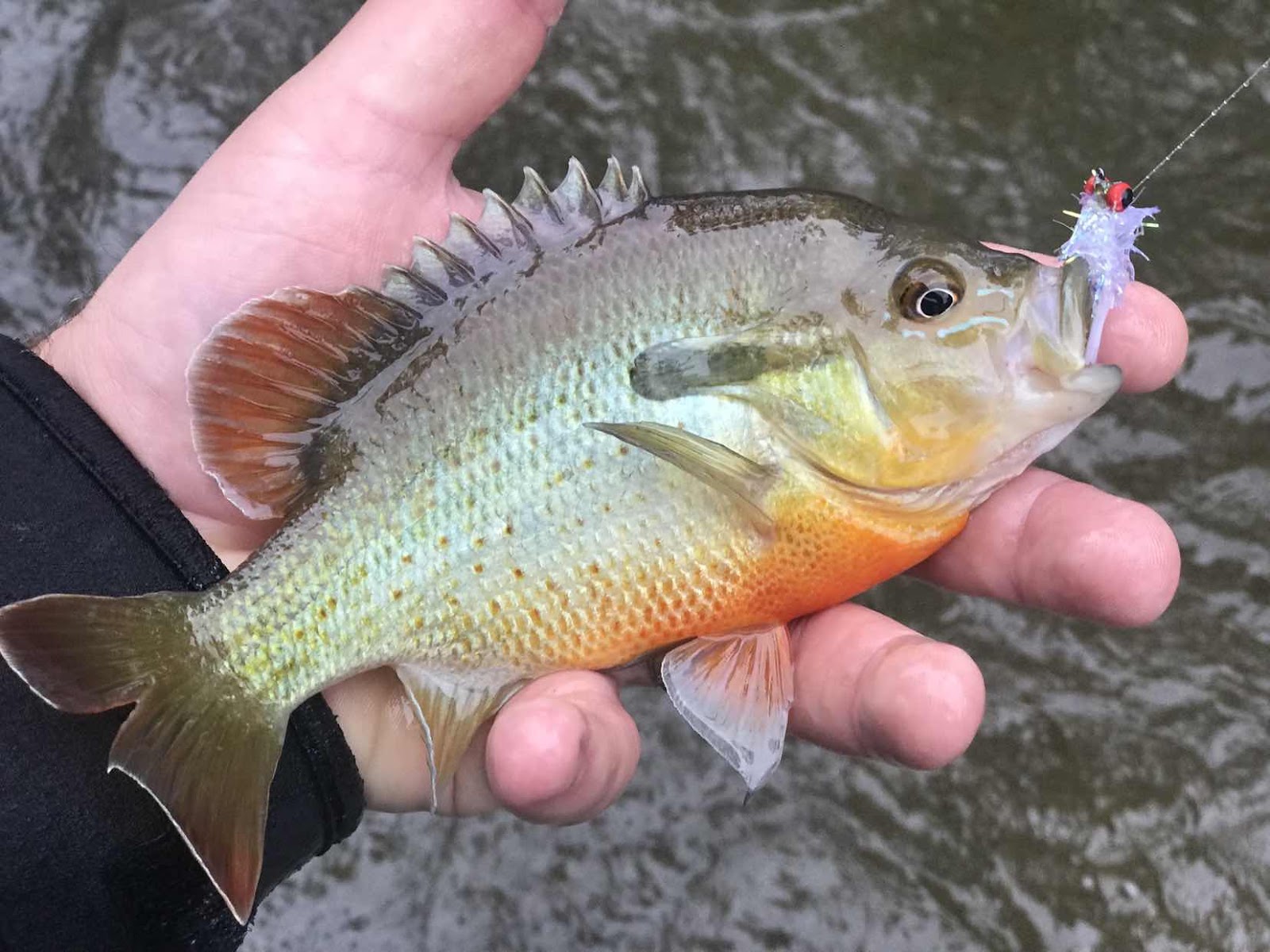 Every Father’s Day I fish for a few hours by myself in the morning. I’ve been doing this trip since my first Father’s Day after becoming a dad in 2012. It is my time to reflect on being a father and husband. This year I changed things up from the usual wild trout fishing adventure. Most years I chase native brook trout in the shady spring fed blue line streams I love. I decided that for this year’s trip I’d target warm water fish. My main targets would be Redbreast Sunfish and Smallmouth Bass. 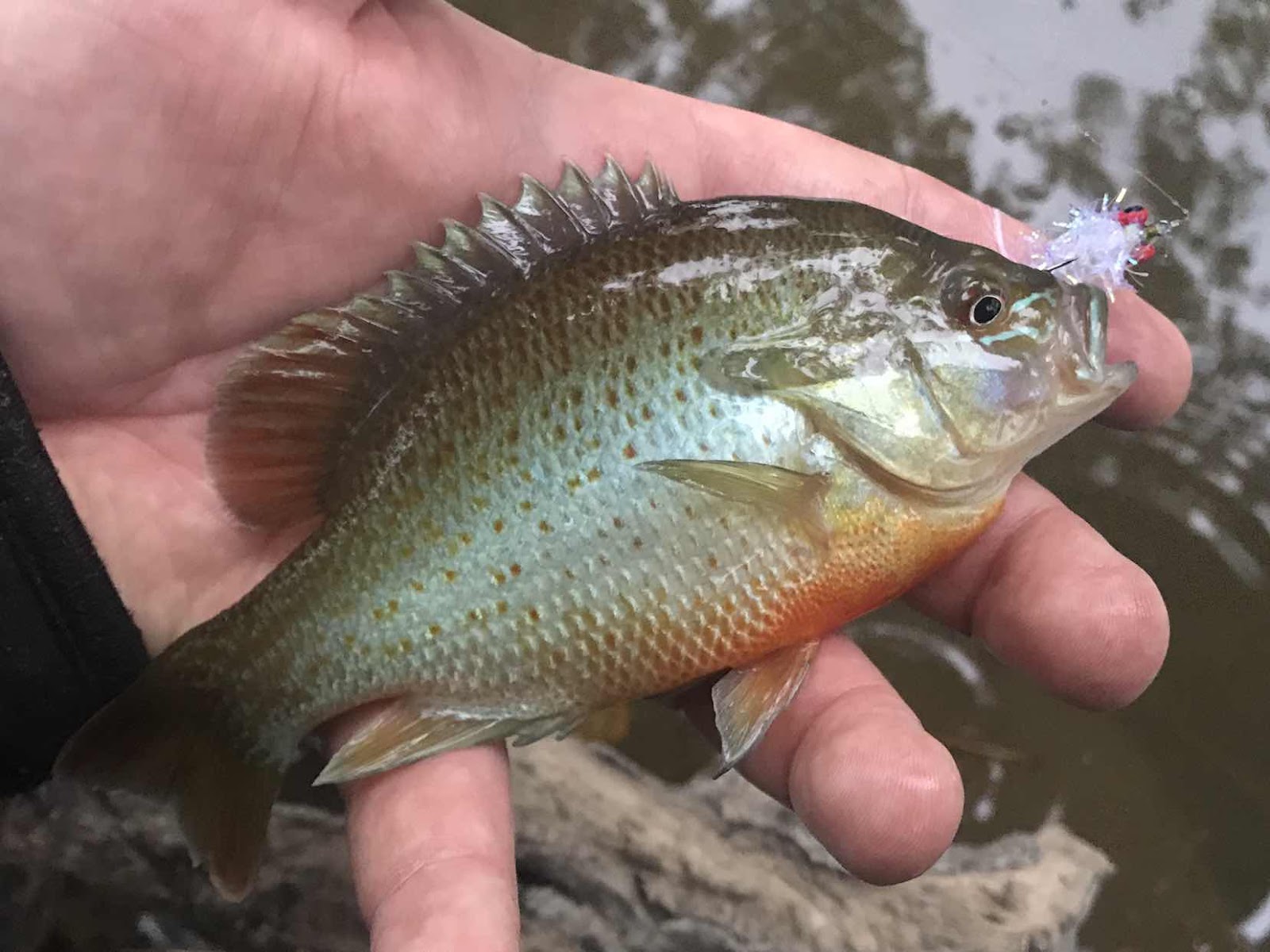 I slept in a little but was still on the stream plenty early enough to sneak in an hour or two of fly fishing. I opted to take my 10’ 2 weight Syndicate rod and chuck smaller streamers. I had fished this stream on Friday with nymphs and did pretty well but I felt I was missing the boat on the larger Redbreasts. 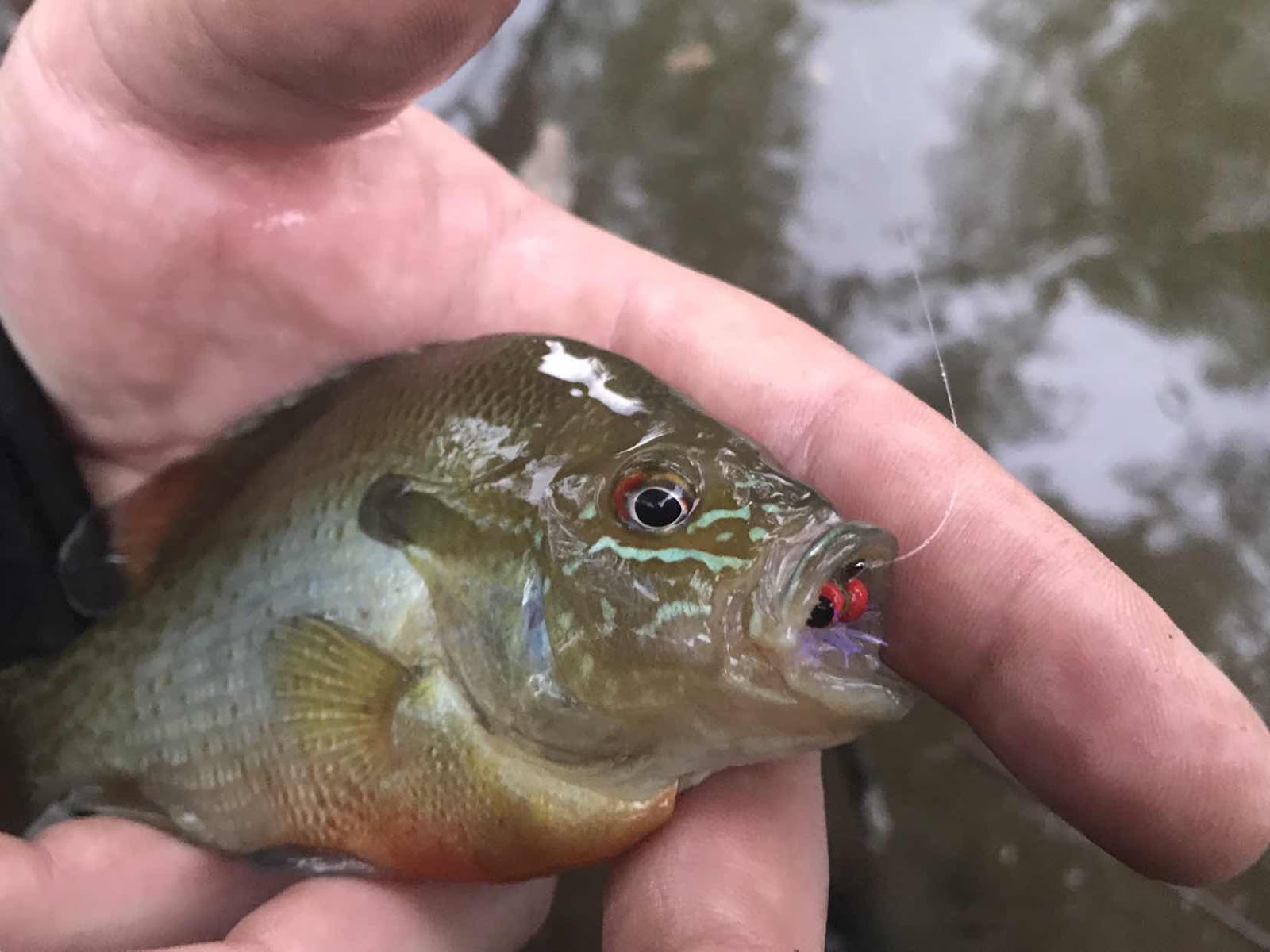 I caught a few fish right off the bat so I was happy but I decided to switch up the locations on the stream I was targeting. I was fishing more backwater eddies and flat slackwater pools. I’ve been having success in these areas of the stream but believed that the larger Redbreasts must be keying in on different areas. I decided to hit up the transition between the riffles and slackwater. I know that trout sometimes like to hang out in these areas but was unsure on the habits of these sunfish. This is why chasing a new species is so much fun. It is new and exciting, and you are constantly taking in information as you fish. 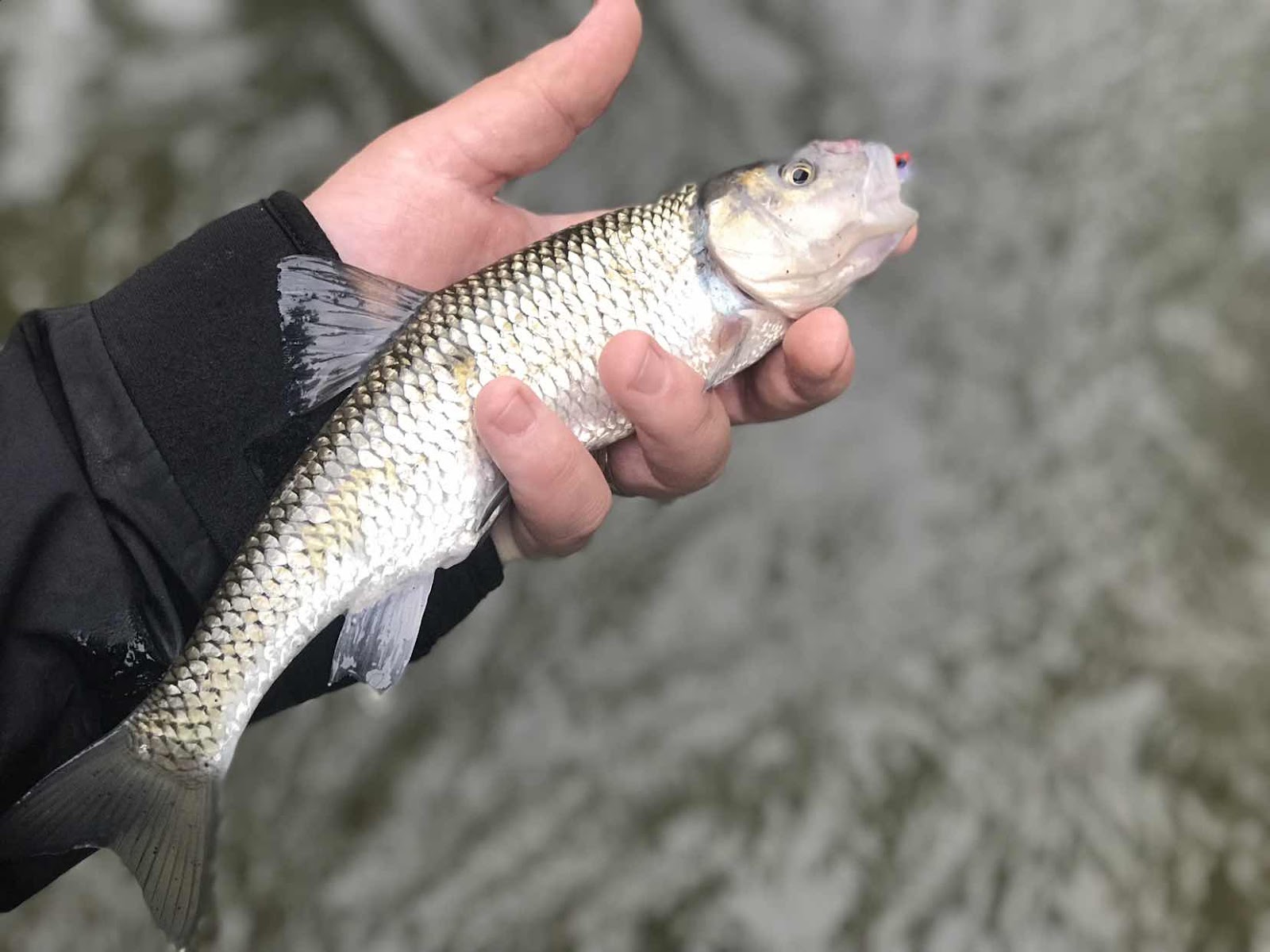 I had a fish really slam my small streamer on the first cast into this area. I set the hook and my 2 weight Syndicate bent over with a strong fighting fish . I wasn’t exactly sure what I had on the end of my line, but the fish was fighting like crazy. I saw a long bright skinny flash and knew it wasn’t either of the two fish species I was targeting. After a great fight the mystery fish was in my net. It was a beauty of a Fallfish. These guys are a blast to catch while fly fishing. They hit like a hammer and fight better than a stocked trout of the same size.

I can’t understand why these fish get such a bad wrap from many anglers. I hear so many people say that they toss Fallfish on the bank, or kill them and let them for the turtles or raccoons. These fish are native to our Pennsylvania water and are a valuable part of our stream's ecosystems. They offer food for many gamefish species as well as outstanding angling opportunities when they become mature. I cringe when I hear someone say they throw these fish on the bank because the we’re eating “Their” trout’s food. 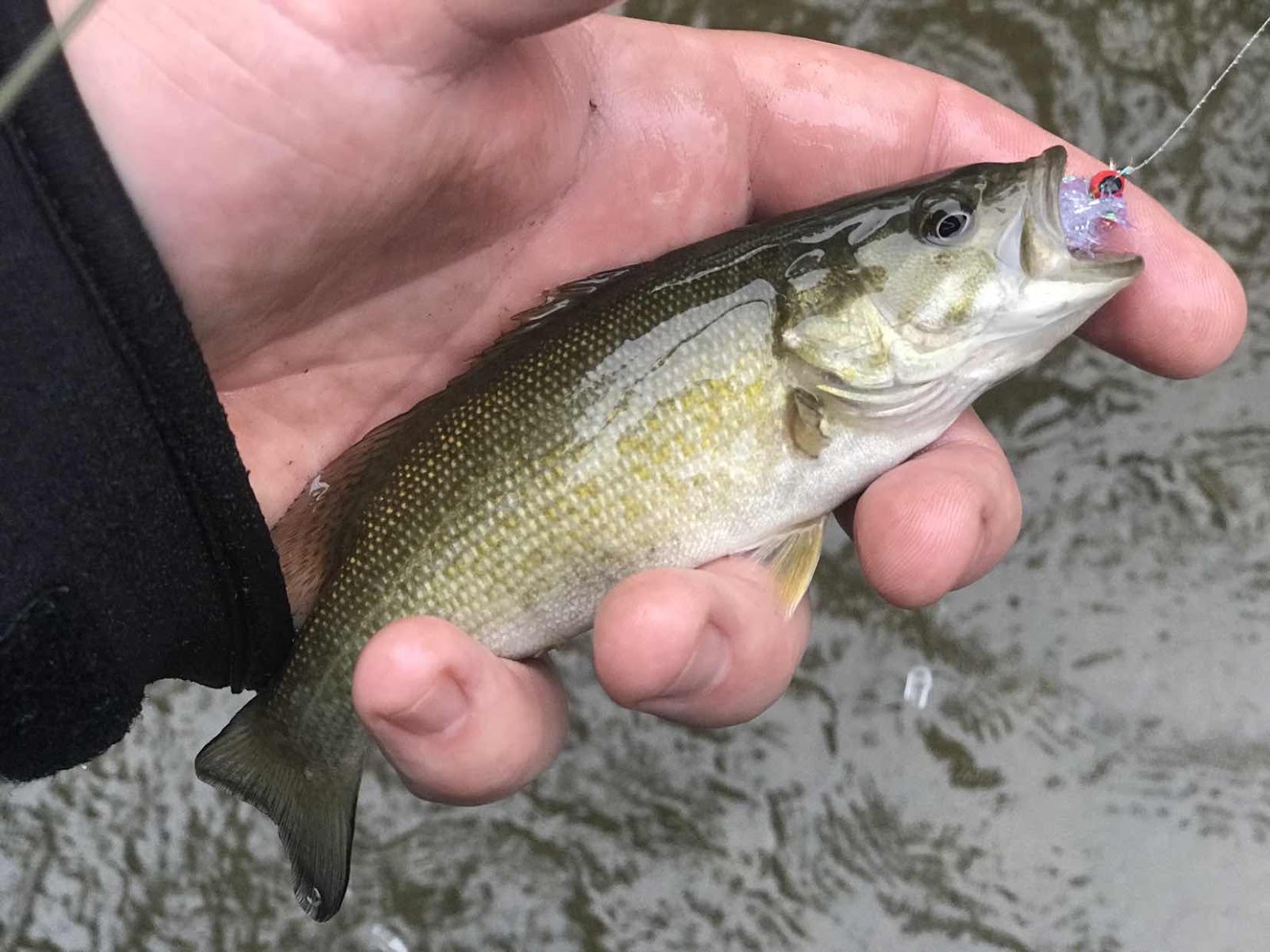 I hit the same transition again and felt a quick hit on my streamer. I set the hook quickly and could tell the fish was small. I was happy however when I brought my second Smallmouth Bass on the fly to hand. This guy was not nearly a trophy sized Smallmouth but he did let me know that there were Smallmouth in this particular section of the stream. I plan on exploring this stream a lot more this summer, and knowing that there are Smallmouth in the stream will add some anticipation whenever my streamers are struck. 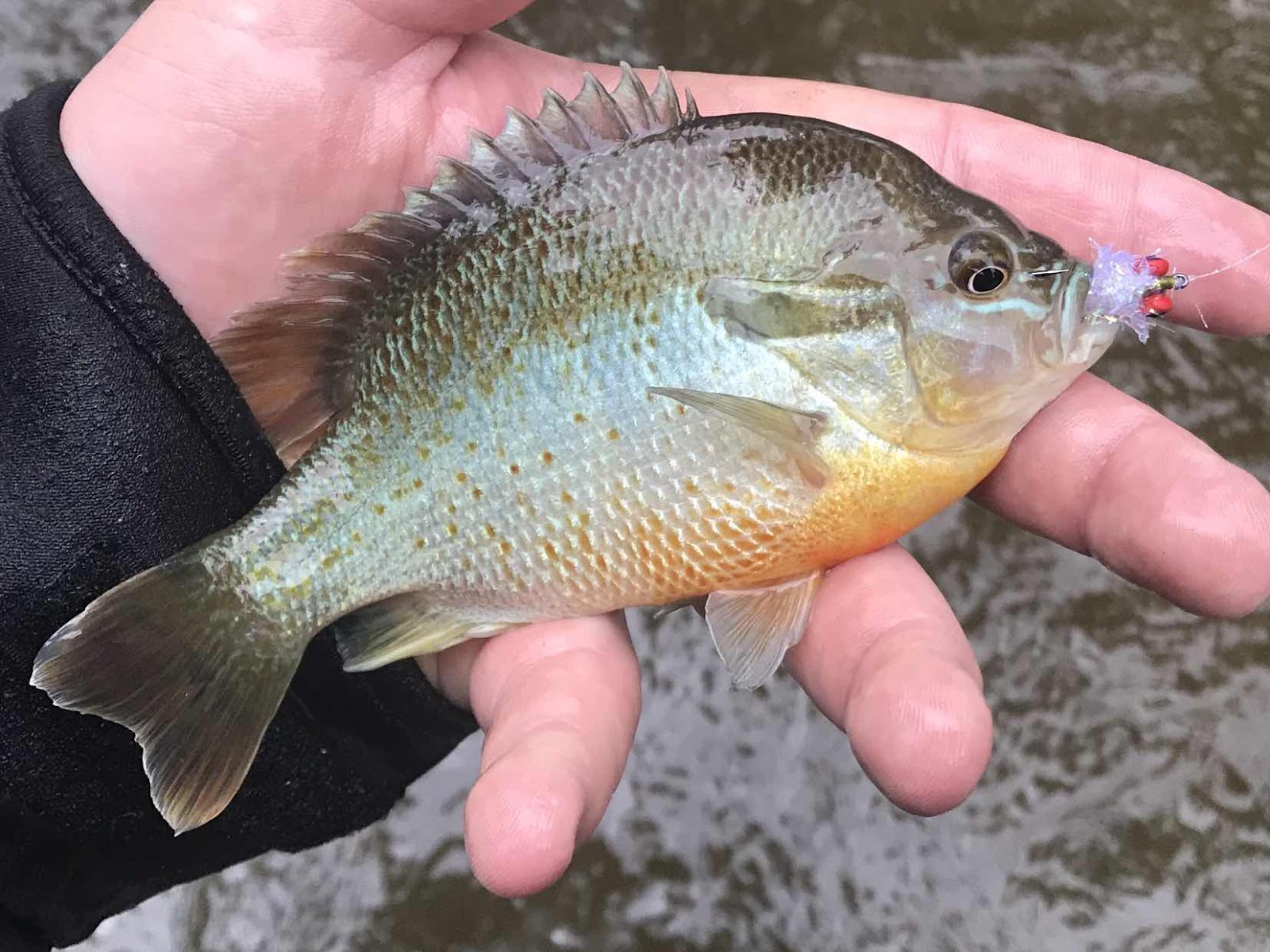 I continued to target the transition zone and had a fish absolutely pulverize my streamer. I strip set the hook and could feel the fish digging hard towards the bottom. On a 2 weight fly rod these guys feel amazing. I fought the fish and it made a dash into the riffle to try and rid itself of my hook. I kept constant pressure and was able to turn the fish back into the shallows and direct him into my net. Another Redbreast Sunfish landed for the day. This guy was rather pretty and had a great amount of the turquoise blue on his sides. I love catching beautiful looking fish. The size of fish is not the main thing I look at anymore. The Perfect fins and vibrant colors of wild fish trip my trigger these days. 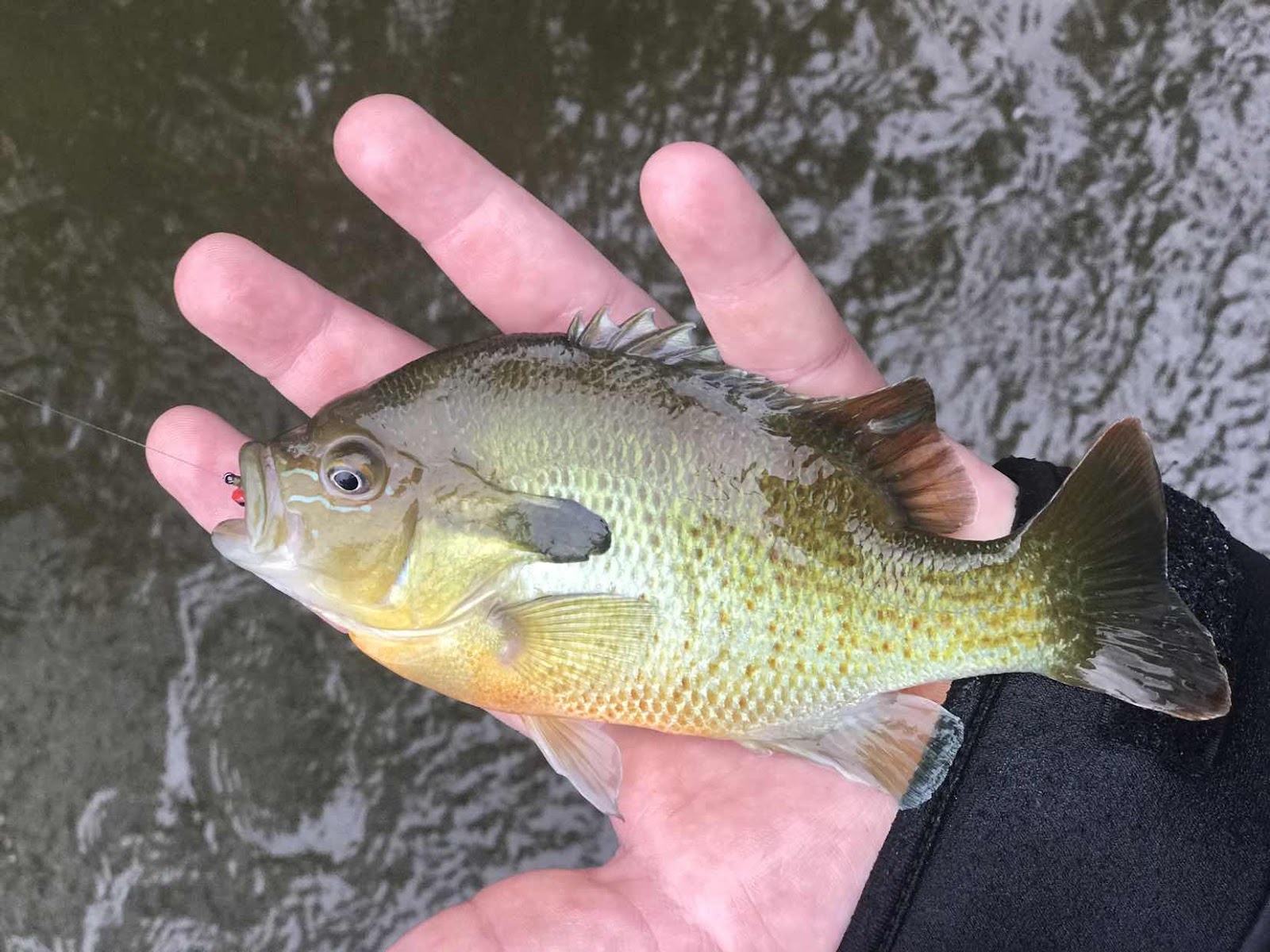 Once again I hit the transition line  but a little farther away this time. Two or three quick strips of my streamer yet again yielded another wack. I strip set and could see a rainbow flash under the water. It was a night and day difference from the fish I was encountering in the shallow eddies. The fish in the slow waster only lightly tapped my nymphs but these larger fish, presumably males, were smacking my streamers with vengeance. This guy was a scrapper and even took a little drag when he went out into the riffle. The fight of these guys is mainly a few explosive bursts followed by a steady pull.  I brought the fish to hand and was once again reminded of just how colorful the Redbreast Sunfish is. I’m a native brookie chaser at heart and these guys can rival the prettiest brookies I’ve ever landed. 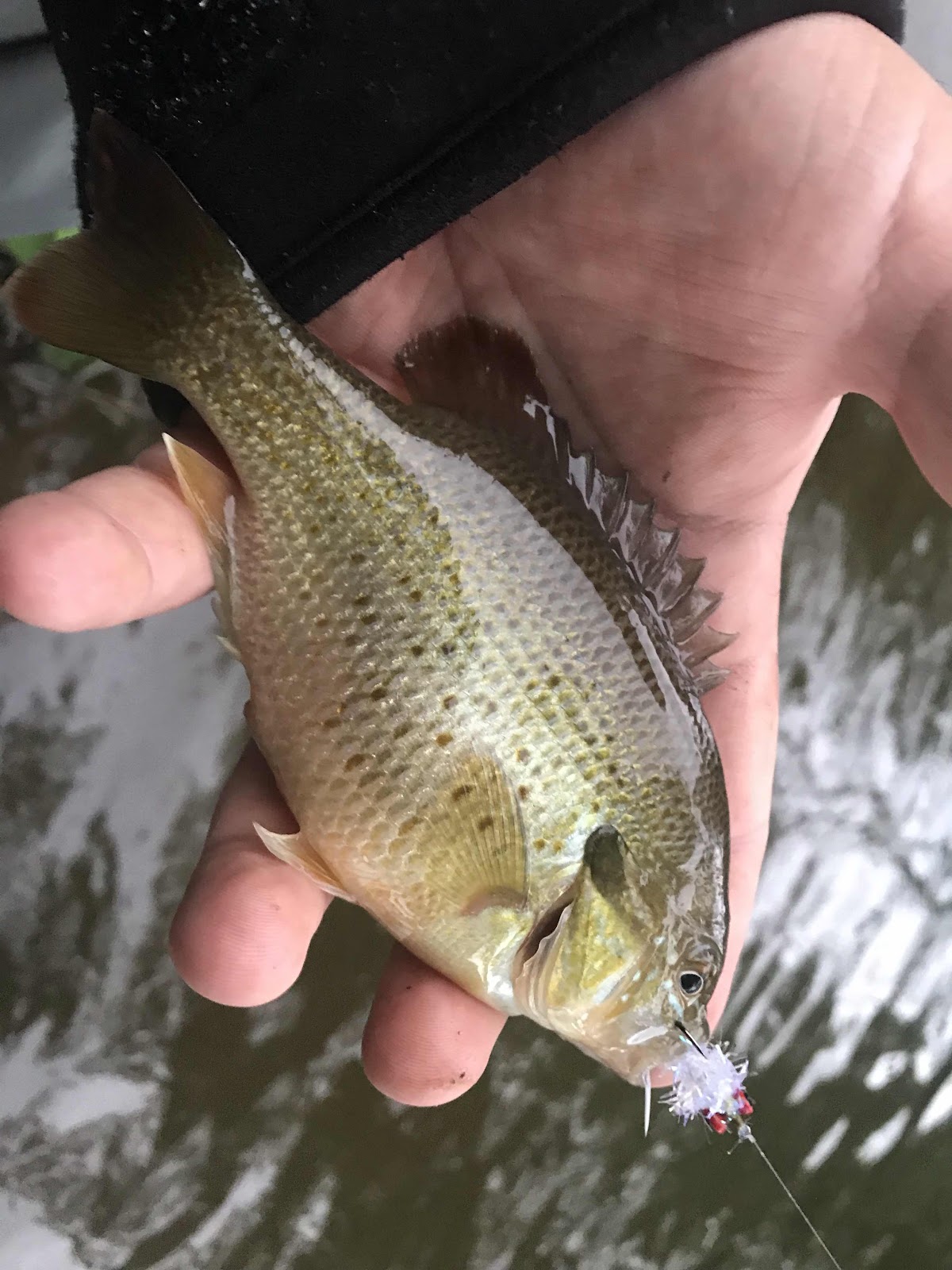 I made a few more casts into the transition zone and did not get another take. I decided to hit an area just off of the transition zone where I could see quite a few rocks in the water. I was hoping to lure a Rockbass out his rocky home with my streamer. I brought the streamer over the rocks and and felt a quick tap on my line. I set the hook and could feel a small fish fluttering in the water. This fish looked to be a female Redbreast that was ready to spawn. I grabbed a quick photo and released her with haste. 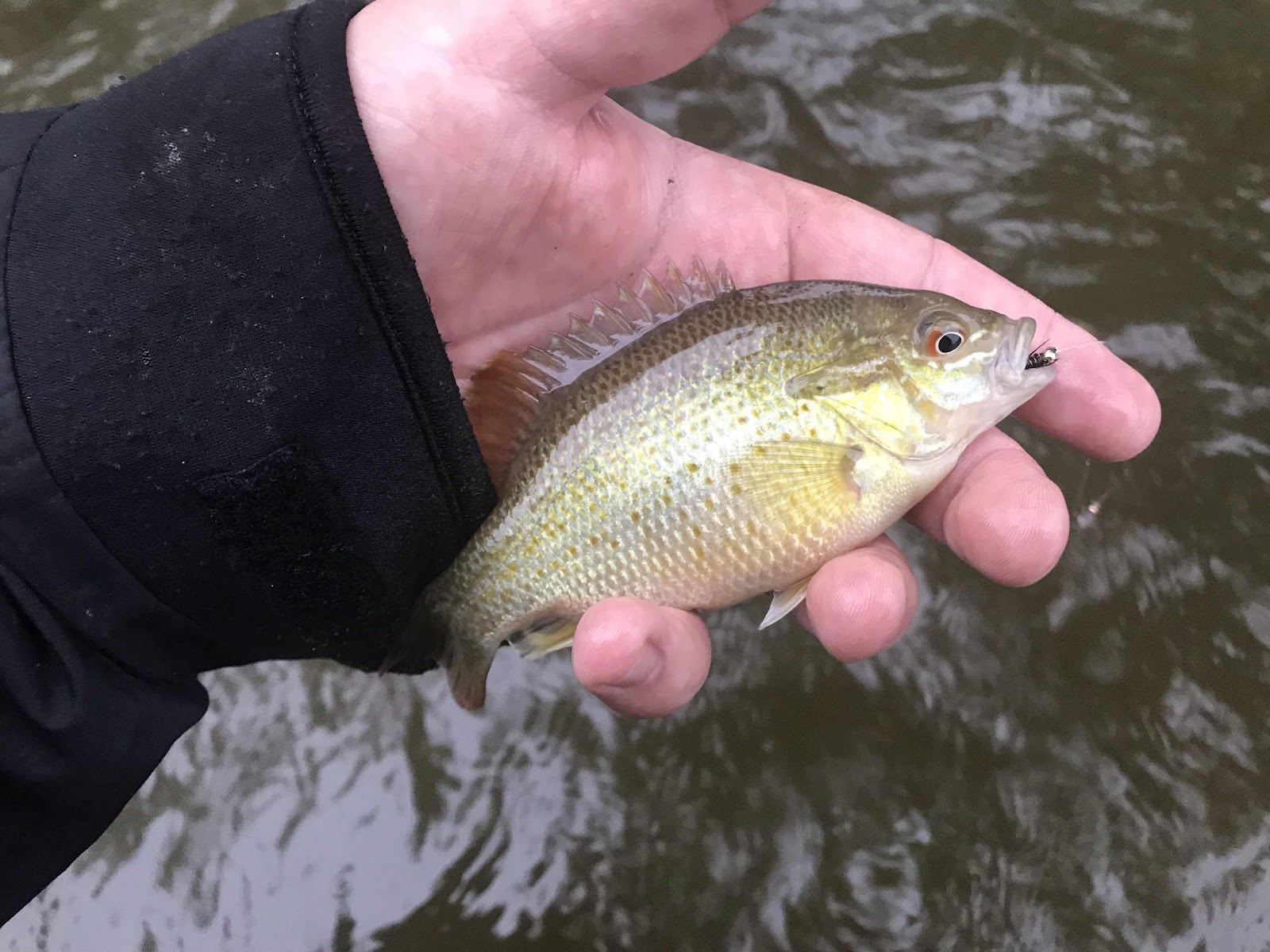 I only had a little time left for my outing and I switched to nymphs.  I figured I’d check the shallow eddies and see if my hypothesis was correct. I casted my peeping caddis nymph with a GHOSTech indicator on to detect the subtle takes. The indicator twitched and as expected a small little Redbreast with a particularly red eye found his way into my hand. 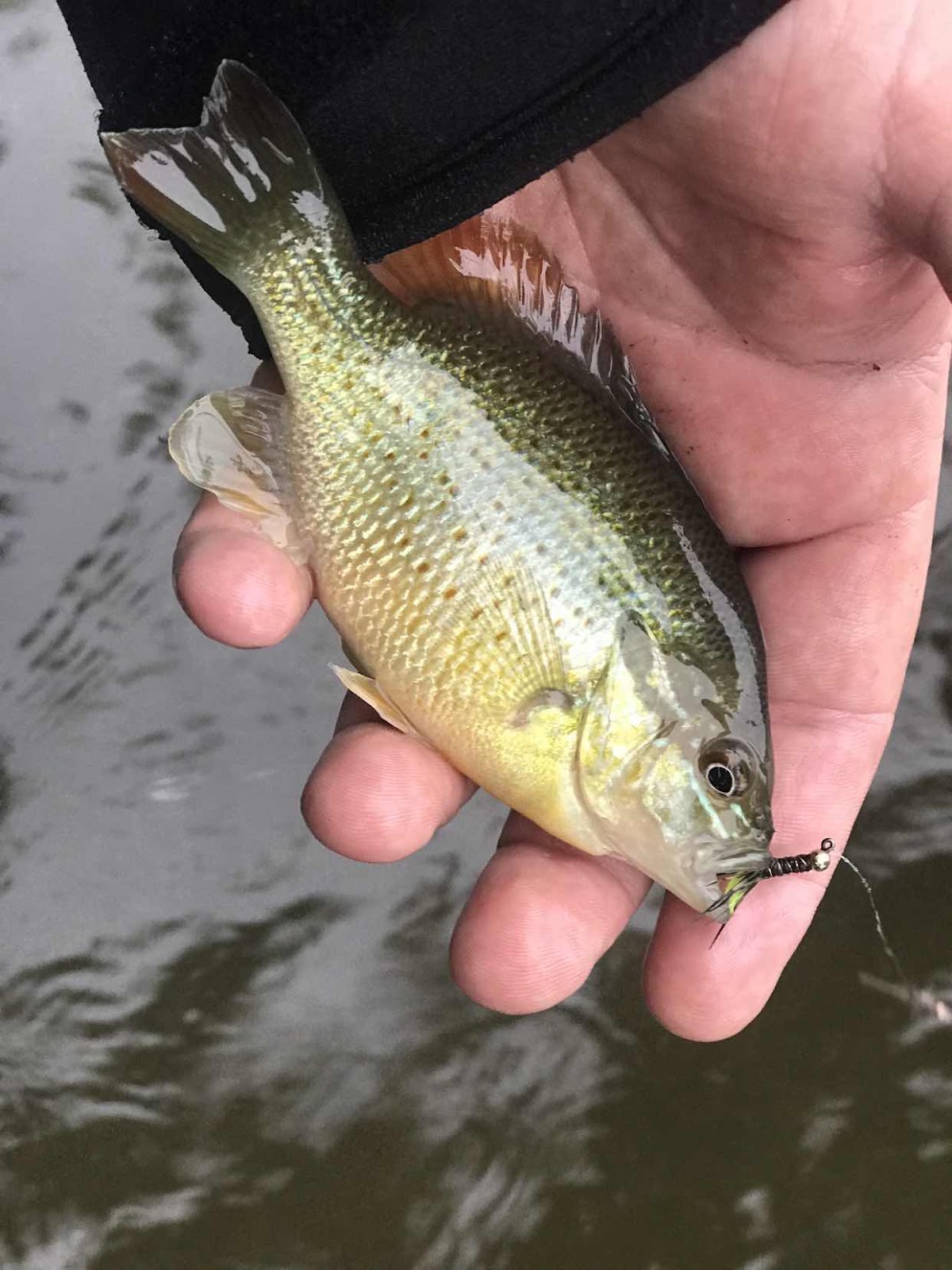 I released that fish and cast again into the shallows. A few seconds later the indicator twitched once more and I caught another small Redbreast. I’m assuming this fish to be another female as it was much less colorful than the previous fish I landed.  I decided this would be enough for my annual Father’s Day trip and made my way back to the car.

I learned a lot on this trip. I learned to hug transition lines of the stream for bigger Redbreast Sunfish. Bigger fish may be caught in the slack water but in my mind they are more interested in food and less about safety from predators when they grow out of their juvenile stage. I learned that these larger males can really nail a streamer and put a bend in your fly rod. I feel the 10’ 2 weight Syndicate is a perfect rod for chasing these guys as well as other headwaters warmwater fishing opportunities. I’m anxious to see how the rod performs with larger Smallmouth Bass.  I didn’t feel under gunned with this rod at all. I was also surprised how well I could cast my lead eye streamers. I have my reel set up with 3 weight line, but I could accurately place my streamer wherever I wanted it. 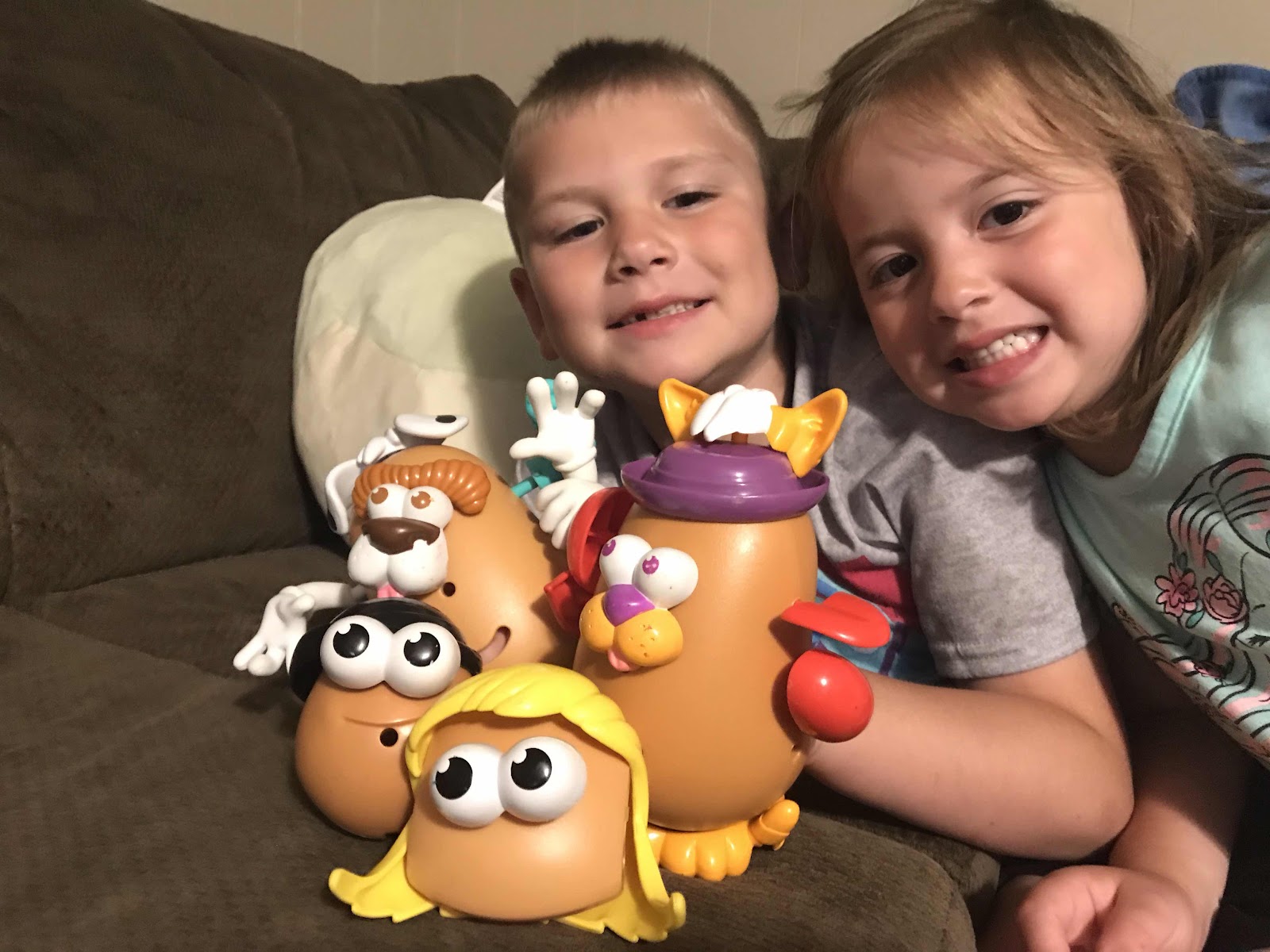 I made my way home to find that only my son was awake. This was great because it meant I could let my wife sleep in a little while. I hopped in the shower and was greeted by my daughters when I finished. We all ate breakfast together and let mom get some much needed sleep.

Father’s Day means a lot to me. I try to be the best dad I can be and balance my time for my outdoor obsessions with time for my family. It isn’t always easy but I do the best I can to ensure my kids are never left behind in my pursuits. I try to include them as much as I can anymore on my outdoor adventures but my short Father’s Day trips are solo missions. My kids love to fish and my daughter, Paisley, even asked me to take her fishing yesterday. I never force them to do any of the activities that I do, and I think that is why they have the desire for he outdoors that  they do.

Sometimes as a Dad you need a little "Solo Dad Time" to reflect and getting a bend in your fly rod is a great way to do just that.
at June 17, 2019