One Last Deer to Show Mom

My mom was diagnosed with Cancer over the summer. The thought of that alone has been tough and the thought of not getting to bring home one more deer to show her was weighing on me as the 2018 season opened. She was always the first person that I would show my harvests. I decided early in the summer that I would dedicate my 2018 archery season to harvesting a deer using traditional archery equipment. I fell in love with traditional archery, and it consumed me after those first few practice sessions. 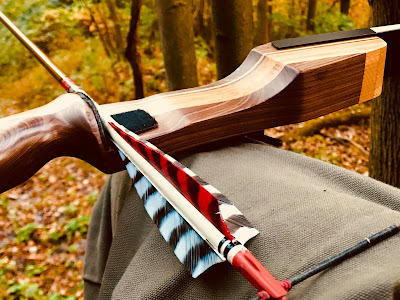 When I decided I would hunt with a recurve I also decided that I would hunt like the way that my ancestors and the archery hunters of the 50's would have. I ditched my modern camo for olive  Dickies work pants, and flannel shirts that would blend in to the fall foliage. I wanted to challenge myself this year to rely on my woodmanship skills and not my equipment to be successful. 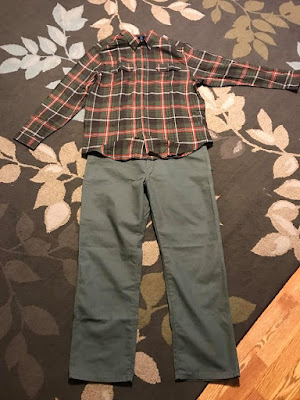 My mom’s health took a drastic turn on October 9th. Hospice had told my family that my mom may not make it through the week. This was very disheartening, so I was doing everything I could to spend more time with my mother. I took off Friday the 12th and decided Thursday night that I would try and go after a big old doe that  busted me last year, then spend the rest of the day with my mom. To put it in a new age terms, this doe was my "#1 hit list deer". 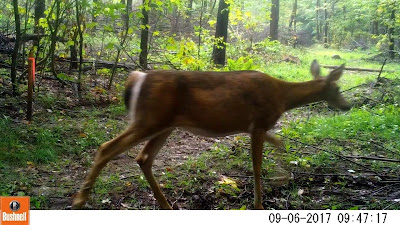 The planning for this hunt began in the summer when I drew up the diagram of the hill I was hunting to understand how this doe was busting me. I was hunting the bottom last year, and the wind would pool my scent at the bottom of my tree. Thermals would then carry my scent right to her. It plagued me how I could have the wind in my face, yet the doe was busting me. I stayed out of that area all summer, and fall. I knew that if she sensed my presence there the game would be over. 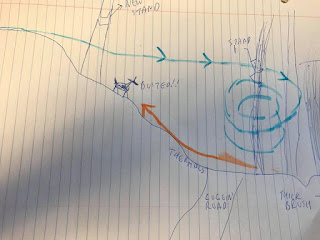 The morning of the 12th I checked my wind and it would be absolutely perfect to chase the old doe. I had all my gear in the jeep the night before and was ready to rock. I put on the old school clothes, and off I went. I planned my entrance so the only ground scent the old doe could cross would be where I crossed a logging road to get to the tree I was going to climb. It was a brisk 43 degrees, and the wind was blustery. 17mph sustained wind with nasty gusts were the conditions. It was still dark when I climbed up. I knew though that if the old doe would read my script, my patience for the exact conditions would pay off.
As the darkness faded and sun began to come up, I could hear a very loud doe bleating and coming around the point. I knew it was her and she was calling very loud to signal to he other deer it was time to go to bed. The intense wind conditions would mark her demise. I could hear the long deep bleats, but the thicket prevented me from seeing her. I was at the ready with tension on my string as my anticipation of the shot grew. Still the bleats grew louder as she made her way towards my set up. 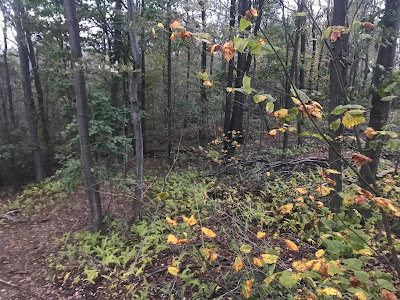 I just could not pick her out. She stopped bleating, and the wind made it impossible for me to hear her footsteps. A minute or two passed then suddenly she let out a loud bleat right under me at about 10 yards. I had been looking over her the whole time. 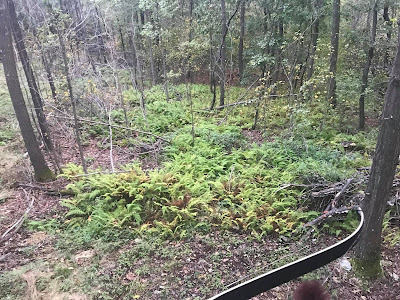 I picked my spot on her heart and came to full draw. Call it her 6th sense but she became alert and jumped a little and repositioned a few yards further than before. I shoot instinctively and never took my eyes off her heart. When she stopped she was quartering too at a sever angle, so I could not shoot. My muscles started to shake holding back the recurve. I let down, but never took my focus from her heart. My arrow must have made a sound upon letting down the bow, and she repositioned again, this time fully exposing her vitals. I came to full draw and talked myself through the shot in my head. "Push, Pull, Anchor, Release" My eyes never left her heart, and at the release I heard the "Thwack" of a chest shot. She whirled around and took off down into the thicket.
"Holy cow I just crushed her" I said out loud. This is when the shaking started, and my emotions took over. I thanked God repeatedly for the opportunity, and then completely lost it in the stand. My tears were both of joy and sadness. I knew that the arrow hit vitals, and I may just get the chance to show my mom one more deer before God called her home. Once I composed myself enough to text, I shot my dad a message letting him know that I just shot the big doe that was busting me forever. I decided that I would wait until 9:30 or so just in case something happened, and my shot was not as good as I thought it was. All I could do was repeatedly pray that God would not take my mom in the meantime and thank him for letting this all come together. 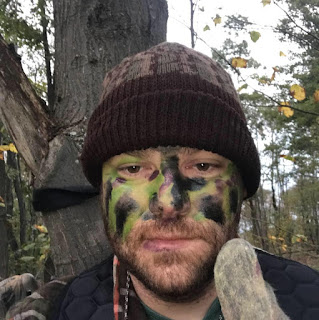 Around 9:00 my dad had texted me and asked if I had found any blood. I gave him a call and he told me that it was not a good morning for my mother. I decided that I would climb down a bit early to begin the track. After looking at where the doe was standing at the shot, I soon realized that in my focus I never took the distance into consideration. All my instincts just took over and my subconscious mind adjusted my left arm for elevation. I am very glad that I shoot this way, as if I would have used a fixed crawl, or other kind of aiming method I would have for sure shot low on this deer.
I climbed down and packed my gear up. I left my climber on the tree, and removed my fleece lined flannel. I had paced the distance to impact and it was 22 yards. This was much further than I wanted to shoot at a deer, but in my focus,  I never realized just how far she went after that initial hop. At impact I immediately found good blood and the top half of my cedar arrow. 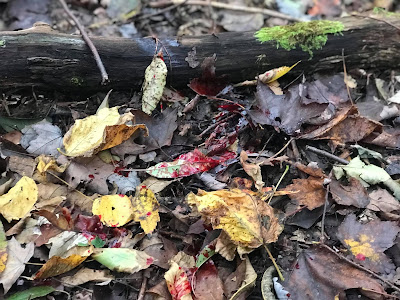 I began the track and had a lot of good blood. The old Bear Razorheads really surprised me. 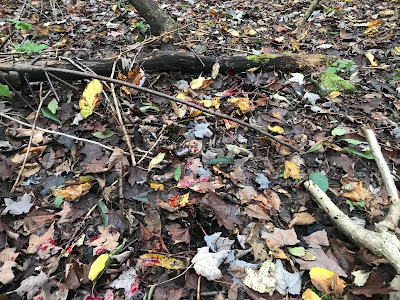 It was an easy blood trail to follow, and I found the doe in about 80 yards or so. I can't begin to tell you how excited I was to finally harvest a deer after all of the long hours of practicing. 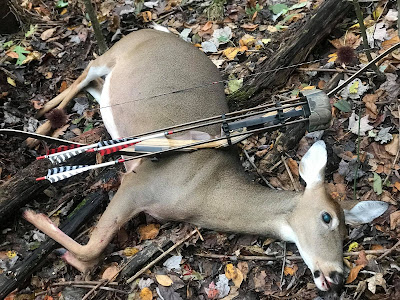 With misty eyes I took some photos of her as she layed, put my tag on her, and field dressed her. I had a pretty decent drag ahead of me, and now my only focus was to get my gear out of the woods and show my mom the pictures. I could always come back for the deer but knowing that my mom only had a limited amount of time left took precedence over the deer. I ran back to my climber, packed it all up and ran out of the woods to my jeep. 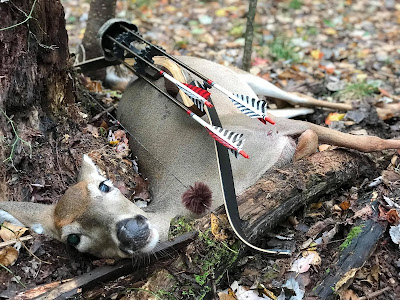 I headed for my mom's house with prayers that I made it in time. I got to my parents and ran up to the door. I took my boots off outside and opened the front door. I walked over to my mom and showed her the photos you saw above. She had enough strength to get out "Good job Buddy". I kept my composure and gave her a big hug. I cannot tell you what those few words meant to me. I feel so unbelievably blessed to get that chance. I stayed with her for a little bit longer then took off to retrieve the deer.
I loaded this doe up on my rackpacker and felt a bit of remorse. I finally put a tag on my "#1 hit lister" but it was so bitter sweet. I have so much respect for this old doe. I know she busted me quite a few times, and countless other hunters over the years. She was my best trophy to date, and here I am a little choked up to see her dead. I finally got back to the jeep, with my outerwear tied to the rack packer. Shirtless and cold I hooked her onto the rack. It was cold enough that I could hang her, so I spent the rest of the day with my mom.
My mom passed that Sunday night, at home. She waited until I came to the house to drop off some meat for my dad. She wanted her babies, husband, and my nephew to be home. We were all in the living room, laughing and reminiscing at old stories of my mom. My sister went to check on here a few minutes later and we realized that she had passed.
On my way home, that night it hit me that the only way I would be able to talk to my mom would be through prayer. "What will my first prayer be to my mom" I thought. I asked my mom to send me a sign that she was in heaven and was ok. As I pulled into my driveway I saw a big momma doe with a button buck in tow. This made me break down, as this was my sign that she was ok.
I have shot nicer bucks, and have had a lot of good hunting memories, but none of these harvests will compare to this doe. Such a special deer. To be able to harvest such and animal, in such a way, and under the circumstances just make this one impossible to beat. I did a European mount of the does skull to have a way to remember this hunt for ever, not that it will ever be forgotten. 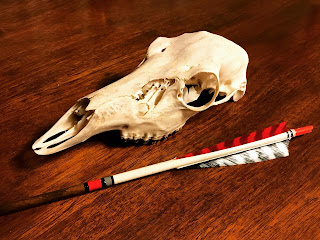 Here is the video I took upon finding the deer.