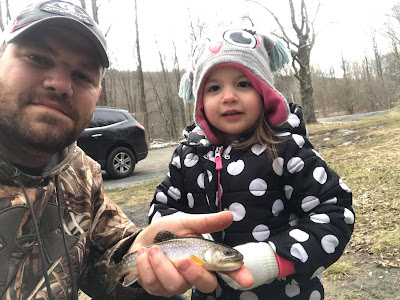 April 7th, 2018 will be a day I will never forget. It was the Mentored Youth Trout fishing day in Pennsylvania. In PA, as us Pennsylvania natives like to call it, the Saturday before the primary trout opener is designated for a day children and their mentors to fish. I was excited at the opportunity to get my children out on the water, with no pressure from others to have our spots taken, and other joys that are often associated with the opening day of trout in PA.


We had a busy day, but I really wanted to take each of my kids out for a little bit anyway. Around 11 o’clock I took my three year old daughter Paisley out. I took my small stream fly rod and a few pink mop flies. An early scouting trip on a morning Sheetz Run, showed me that the local trout club, Traditional Anglers of Pennsylvania, had loaded up the easy access spots with trout for Mentored Day. I can’t thank them enough for doing this as the state was not going to stock this stream until the week following Mentored Day.


We left the house and the temperature read twenty-six degrees on my wife’s car. Very chilly, but I knew it would not take us long to land a few fresh stockies, and gain a couple smiles in the process. We got there and the first cast we made together brought her a stocked brookie. She was excited to see the fish, and just had to touch him. Over the next fifteen minutes each time the fly hit the water either a fish was caught, or we missed it. After her fourth fish I decided that it was just too chilly to have a three year old out any longer. So back to the house we went. 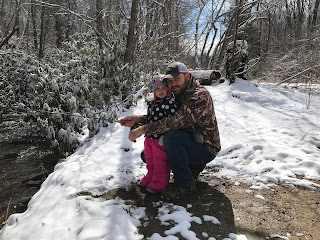 When I got home, I had to rush to take Corbin, my 5 year old son, to his friend’s birthday party. Upon getting back from dropping off my son, my wife, the twins, and I headed out grocery shopping. The trip took a little long so I was on edge to get back and get my daughter Kaylee out. We picked up Corbin, dropped off the groceries, and I was off for the second session of Mentored Day. 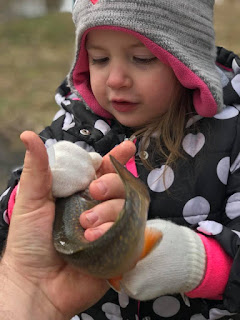 Kaylee was very excited to hit the water and catch fish just like her sissy did. The snow on the ground had melted, and the water temperature had raised a little. The fish were very active and eager to take the bright pink mop fly. Kaylee landed eight brookies in 20 minutes. I decided now it was time to take out big brother. Kaylee wanted to keep a few so we could eat them. My kids love trout. I have always been a catch and release angler, but now one stipulation is I bring a few trout home for the kids to eat, so they don't drive my wife crazy about it. 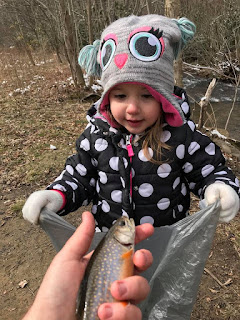 Back to the house I went to pick up Corbin. He was very eager to get out, and it was quite new to him that I took the girls before him.  He is used to being the only one who gets to go fishing. It is quite impossible to take twin 3 year olds and a five year old out at the same time, so the kids get to take shifts. The girls are not use to being separated from each other, so every time I take one or the other I get to hear, “Where is sissy, Daddy?”  Corbin and I hit the ground running. Corbin opted out of using the flies he tied and told me, “Cheese eggs always work, Dad!” We hit the local grocery store that also happens to carry fishing supplies. This is a commonplace in rural Pennsylvania. I mean who has time to make two separate trips when you are buying lunch meat and pierogis to go to the bait shop?


Corbin and I went to the same hole that the twins and I had fished, but I think the gig was up. We only missed one stockie, and the rest would barely look at the fly. We moved down stream to a hole that had a smaller bridge over it. I had Corb between my legs, but after hooking and landing the first fish he was afraid of falling in. We went ahead and changed our game plan. I was going to cast and hook the fish, and Corbin was to land them.  I missed a few, but decided that we would be better off casting from upstream and bringing the fish out from under the bridge.We caught a few trout, and the new rod I bought him was working great. The rod was just one of your run of the mill, Walmart specials that came with line on it. We landed eight or nine trout on it with no issues. 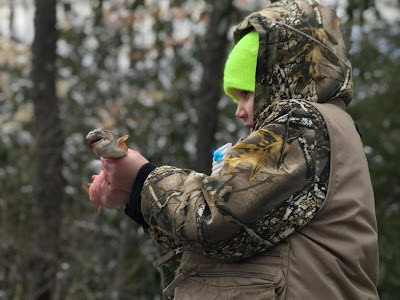 Corbin looked at me and said, “Dad, let’s put on one little egg and a big egg that will really get them.” He reached his little hands into the salmon egg jar and in his mind he gave me the perfect combo to catch the biggest trout on the stream. I flipped the bait under the bridge, and a fish absolutely hammers it. I set the hook and give Corbin the rod.  I see the unmistakable red stripe of a hold over rainbow under the surface. He fought it then the fish broke the line.


“DAD! It’s a legend!!!”…” Line-Breaker/Split Shot Breaker lives under this bridge!!!”…”He is the ruler of the stream!!!”…. He went on and on about this legendary fish for about an hour. Every other fish caught saying was going to be Line Breaker. I decided to take him to another stream to try for a true line breaker but it never showed. He managed 1 rainbow by himself, so we went back to the bridge that Line-Breaker/Split Shot Breaker called home. 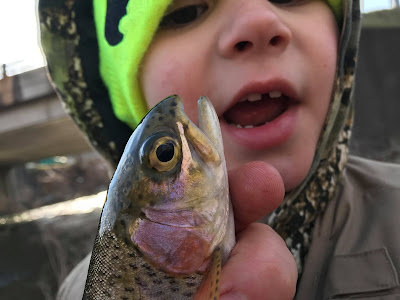 We got back to the bridge with only a few cheese eggs left. I told Corbin that we could only keep one more fish, and if he kept a fish we had to be done for the day. The mentored day in Pennsylvania allows the kids to keep two trout. So we caught a few more trout, a few decent ones at that, but Corbin was set on Line-Breaker/ Split Shot Breaker.


Corbin handed me the deadly combo that Line-Breaker ate last time. I pitched the salmon egg about a foot away from a low hanging mountain laurel and let it drift. WHAM! A trout just hammers the combo again. I set the hook and hand Corbin the rod once again. The fish had a lot more fight than the previous fresh stocked brookies we were catching. It peeled drag on his little push button rod. This fish thought he was tough. As Corbin hoisted the rainbow out of the water and to my level I just shook my head. There in the side of the wriggling rainbows mouth was a fresh eagle claw hook. I told Corbin to look at the fish’s mouth.


“I CAUGHT THE LEGEND DAD AND HIS LEGEND ENDS TODAY!” 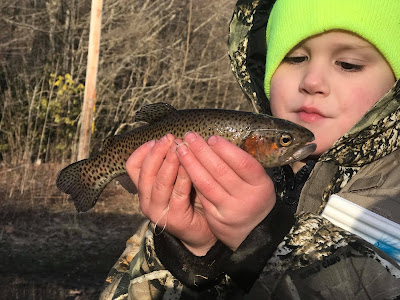 In one motion he grabbed the fish from my hand, and ran over to his bag. No time for a picture when dealing with such a tyrannical rainbow trout I guess. We were laughing and high fiving with smiles ear to ear. He was so fired up about catching Line-Breaker that I thought he was going to be sick. We got back to the car and I snagged a few pictures of Corbin and Line-Breaker. Line-Breaker/ Split Shot Breaker was a monstrous 10” hold over rainbow and was absolutely beautiful. Deep red strip the entire length of his body, and thousands of dark spots cover him. We headed home and Corbin stormed into the house dragging his fish to show his mom. He pulls out the fish in the living room with the twins in tow. There was fish slime dropping all over the floor, and smiles all around. I ended up cooking all of the trout of the day, and the kids and I enjoyed them. The perfect way to cap such a great day in rural Pennsylvania. It was how I was brought up and those traditions will be passed down. 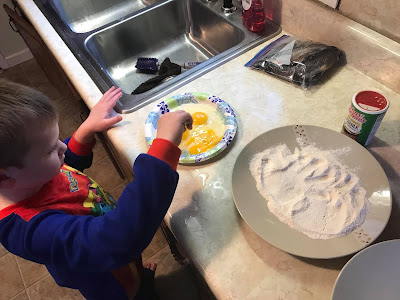 Some day when Corbin reads this post he will understand that it was the line that was weak that caused it to break, and not the sheer power of the 10” hold over rainbow, but for now I am happy with “THE LEGEND OF LINE-BREAKER/SPLITSHOT BREAKER” as is.
at November 15, 2018