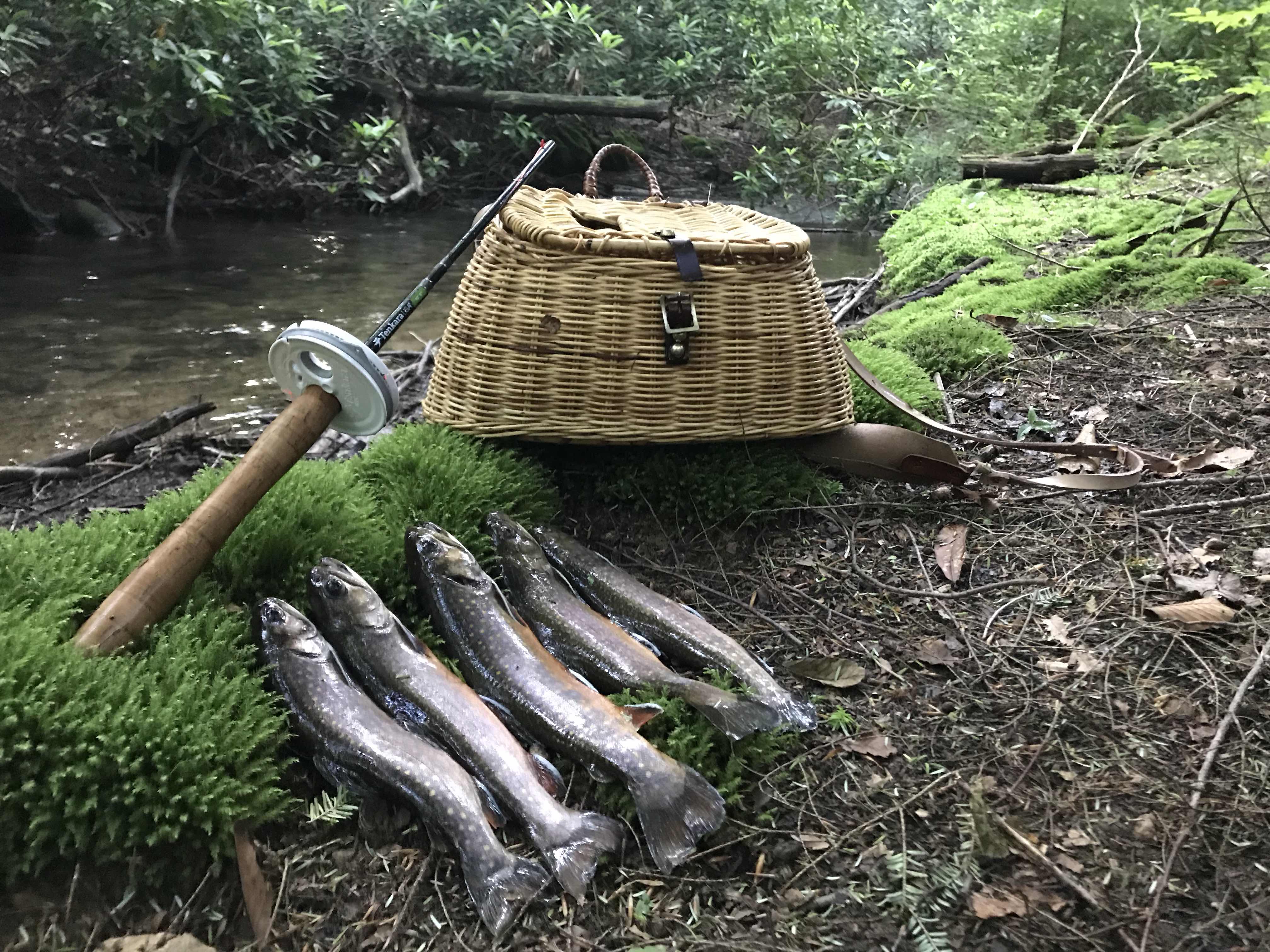 I am typically a catch and release Angler. Trout, panfish, most everything I catch I release. This is a special circumstance for me. This section of stream is a class A in Pennsylvania.It is illegal to stock trout in a Class A section of water unless the stocking is done by the Fish Commission or permission is granted by the fish commission. The commission designates these areas by electro shocking and studying the stream. To get the Class A title the stream must yield a certain Biomass. Some streams may yield enough biomass and have enough food to support both native/wild trout and stocked trout so the PA fish commission will stock a certain number of trout on that section of stream.
These trout were illegally stocked and do not belong in this area. There is a dam that divides the lower end (stocked) and the upper end (class A). This dam would not allow these stocked fish to move up. I figured I would clarify this before it was asked.
In PA you can legally keep trout from class A Waters from Mid April until Early September so this worked out well to remove some of these Illegally stocked fish.
If you target native brook trout it becomes quite easy to distinguish a native and a stockie. If you don’t, here are some characteristics that I look for as sort of a check list to determine if the fish is or is not intact a native brookie. The fish below is a perfect example of the native brook trout. 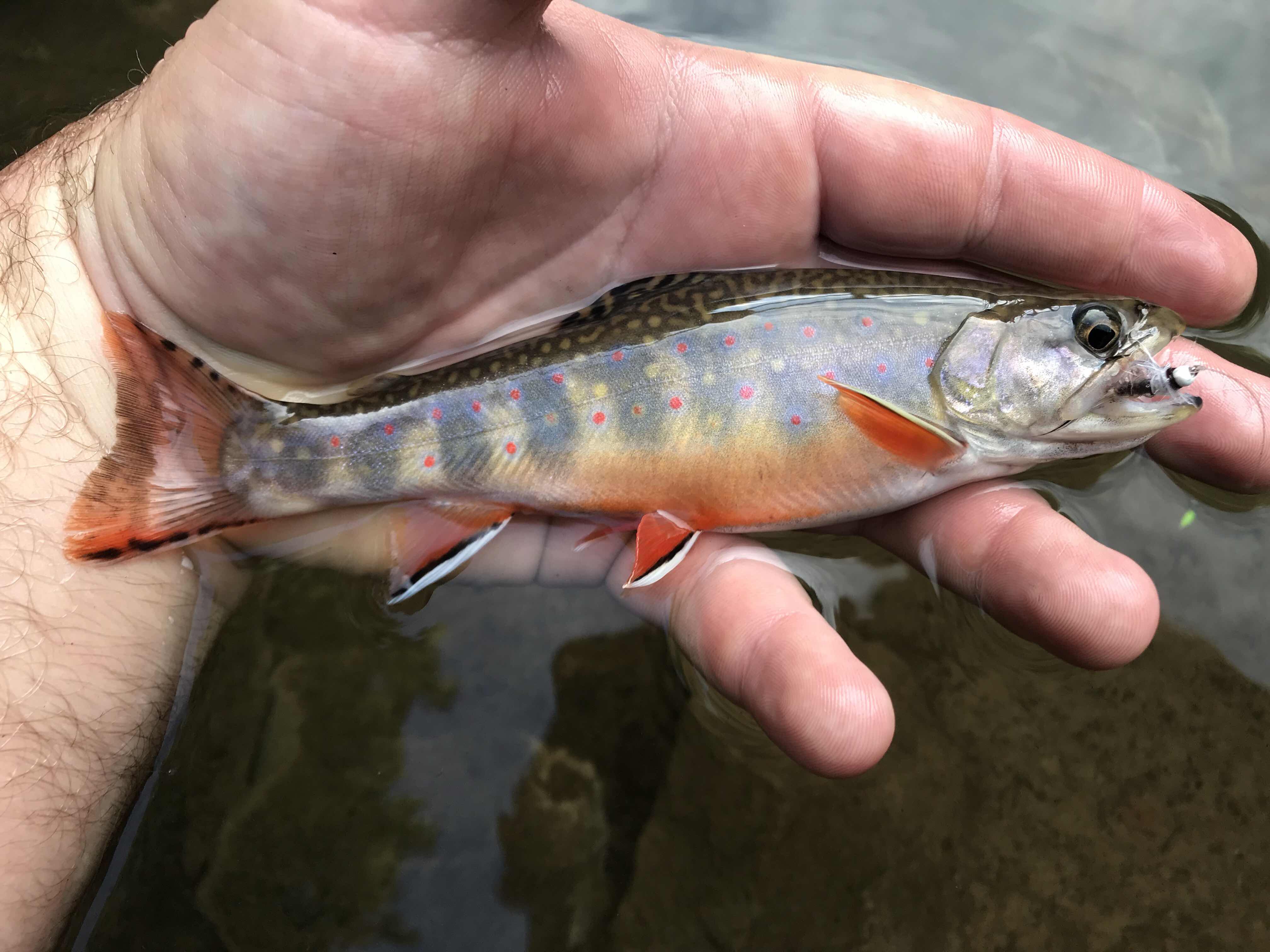 1) condition of fins: a native brookies fins will be sharp, and free from issues caused from rubbing its tail off of concrete.
2) tail: a natives tail will have sharp edges and have a bit more pointed edges. A stocked brookie will have a more squat tail with rounded edges
3) gill plates: stocked brook trout will also have issues with their gill plates that will look irregular
4) Black strip on fins: a natives fin strip will pretty much look like a sharp single stroke of a thin paint brush. A stocked brook trouts will be sort of broken and mixed in with the white.
5) although a stocked brook trout that has been in the water for a year or more will take on similar colors, they will never get to the brightness in coloration if that of a native. 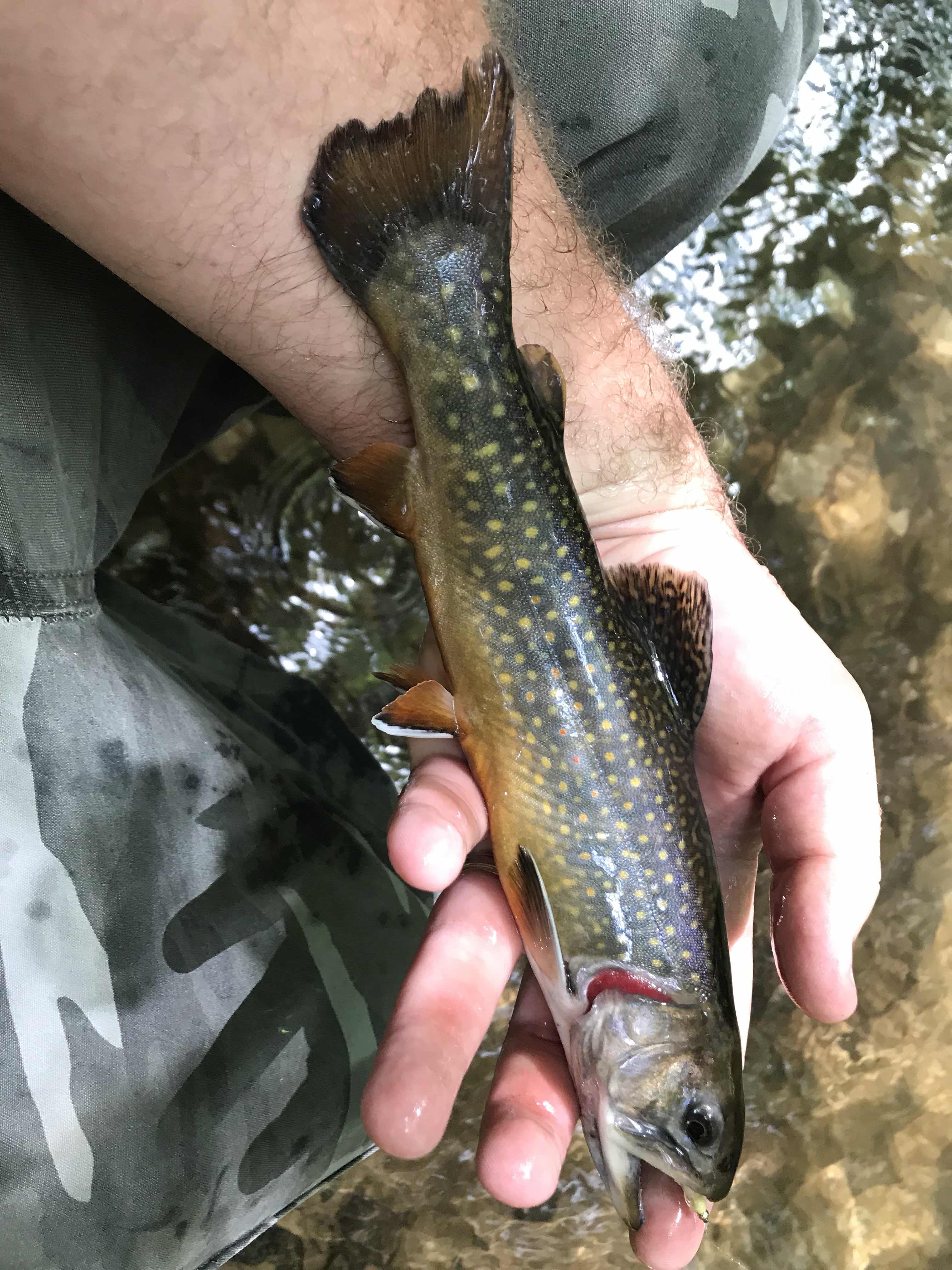 For reference the fish above is a hold over brook trout. This means that the fish was in the stream at least since the previous stocking season. You can see his gill plate is messed up and his tail is damaged. 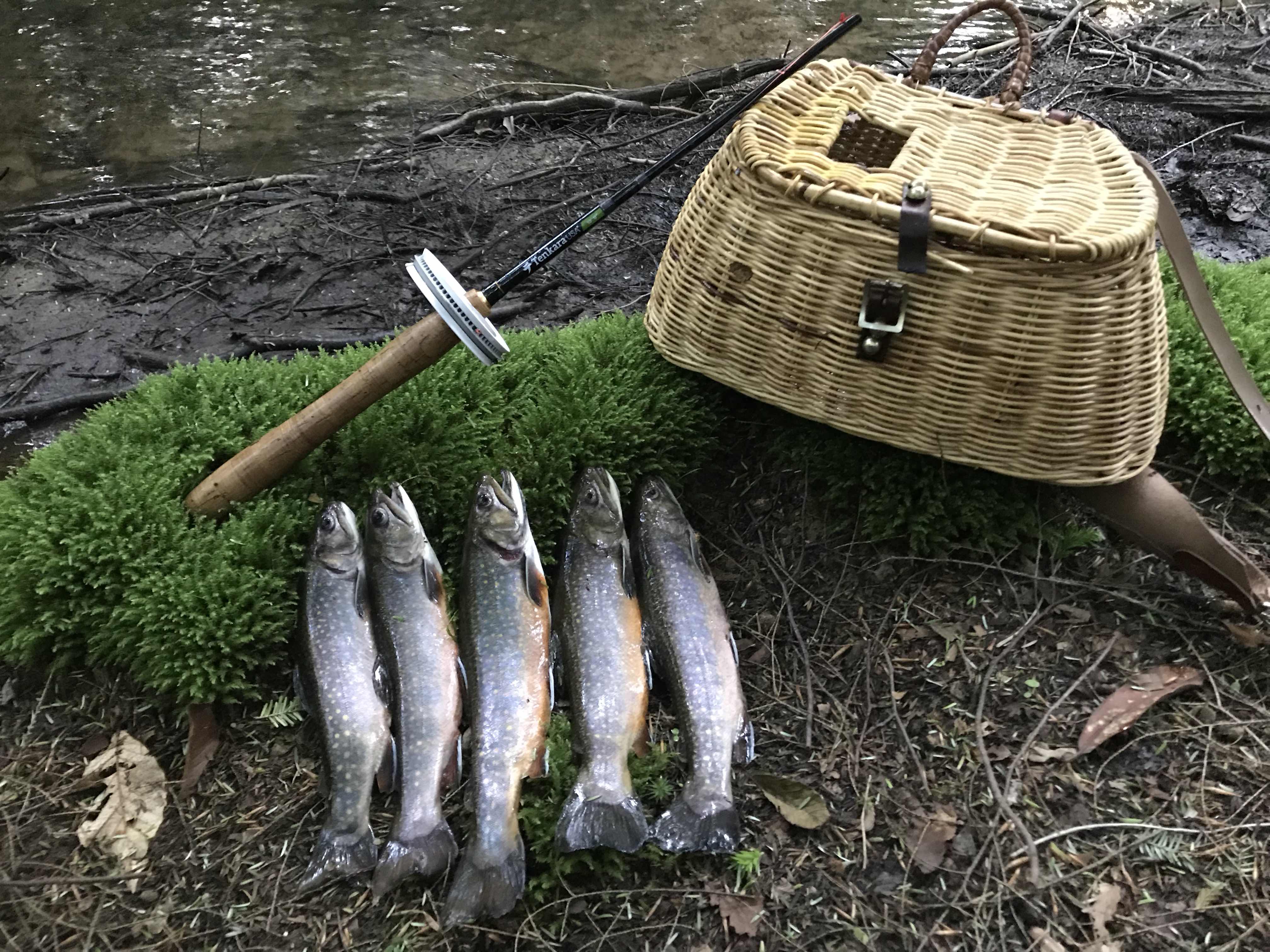 I took these Guys home and grilled them with my kids. When I first brought them in my son was bummed because they were dead. He was brought up on C&R principles so I had to explain to him that it was important to remove these stocked fish to help conserve the native brook trout population of the stream. I feel it is important to raise awareness on these sorts of issues. Rogue stocking is illegal and jeopardizes native trout populations.
As I said I am typically a catch and release Angler and have never kept a wild/native trout in my life. These 5 fish were the first I’ve kept in 2018 and have probably landed close to 1,000 trout since January.
If you do harvest trout this is my favorite way to cook them.
I lay down some aluminum foil and lightly spray with non stick cooking spray. Put a few dabs of butter down, and cover with old bay seasoning. 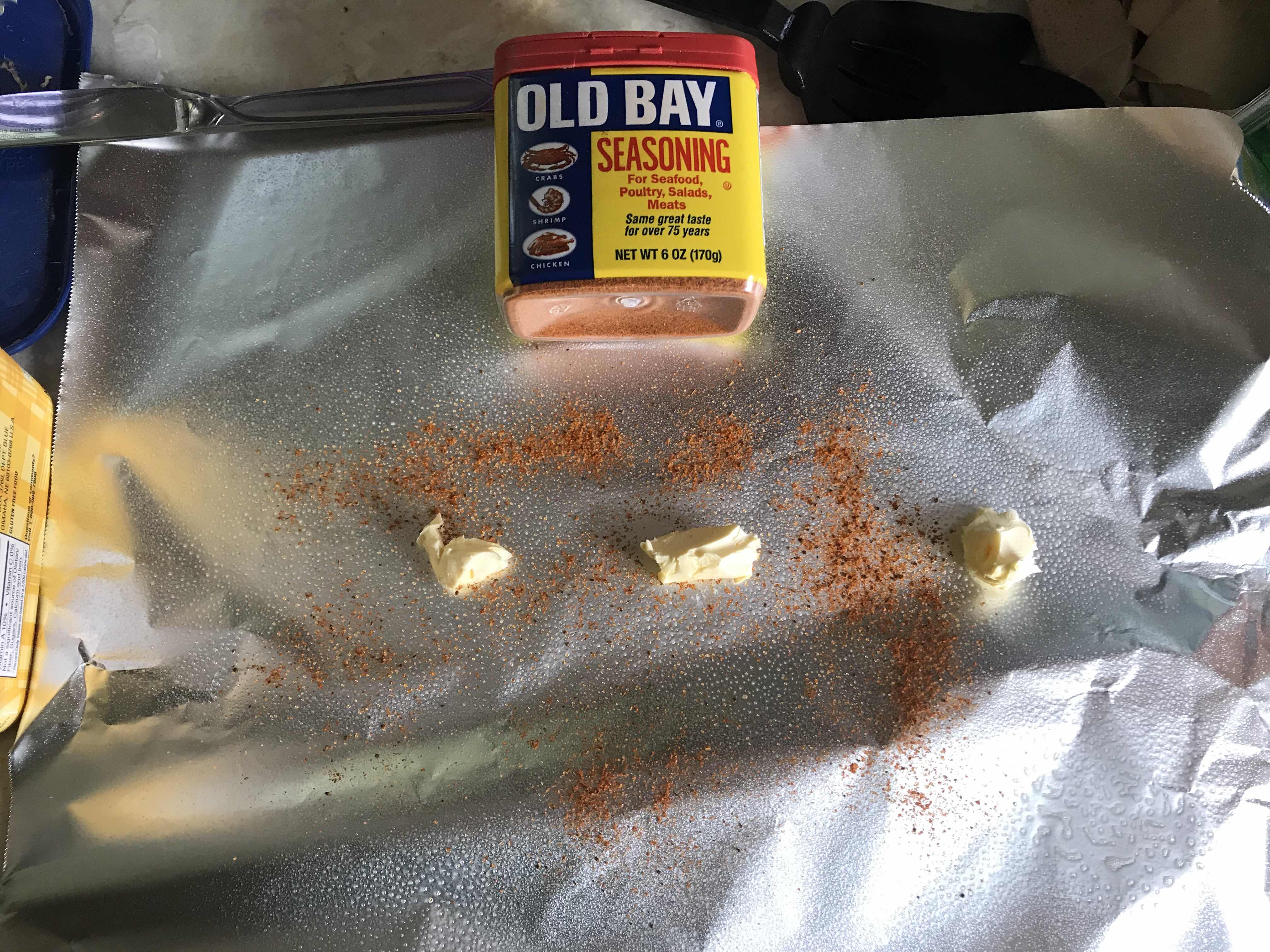 Next put your Brookie on top of the butter and old bay. I open the trouts body cavity and sprinkle old bay seasoning inside. Next cut a few cherry tomatoes in half and stuff them inside.  Add a few more dollops of butter inside as well. 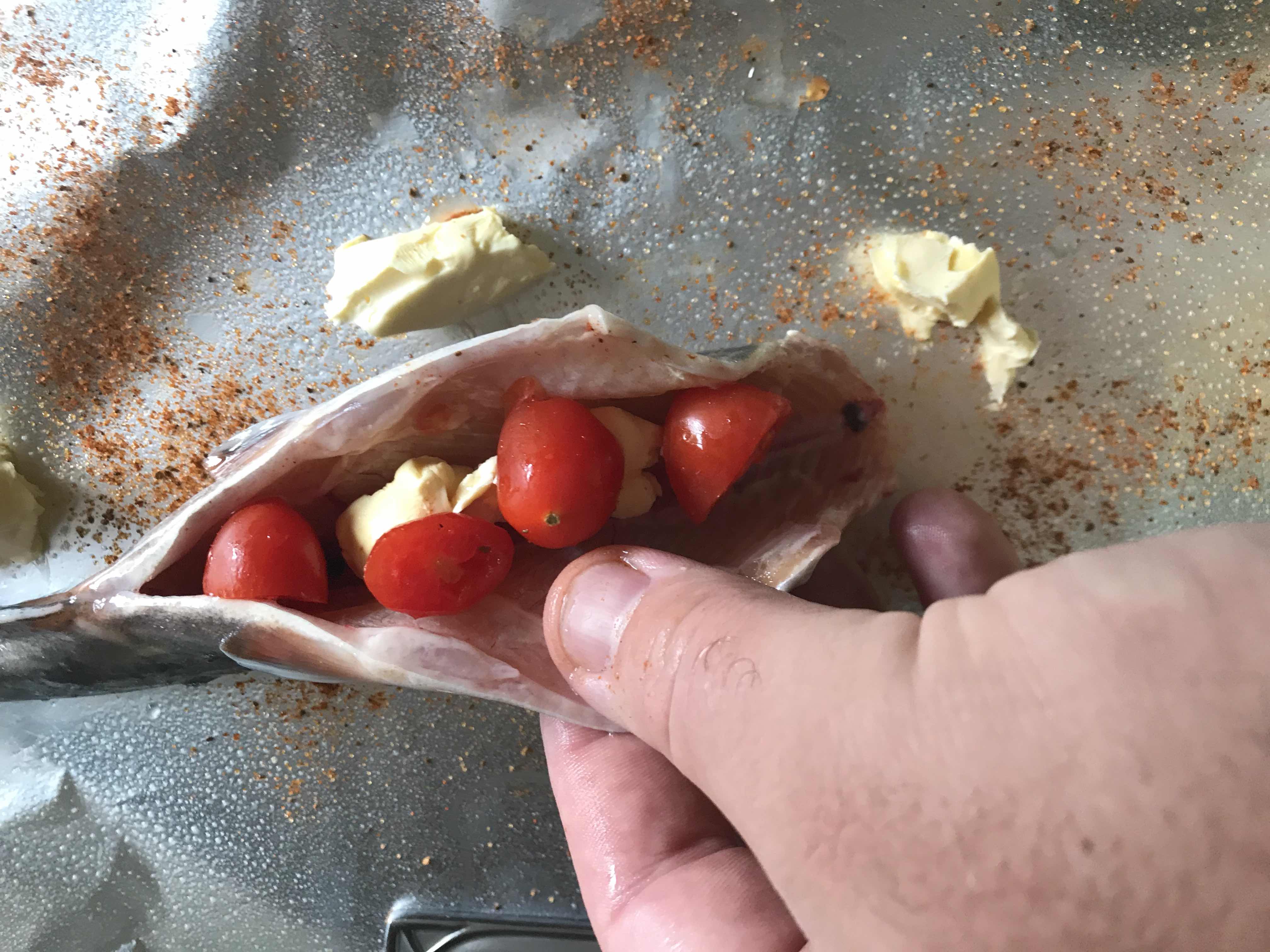 Next sprinkle some more old bay on top of the fish. 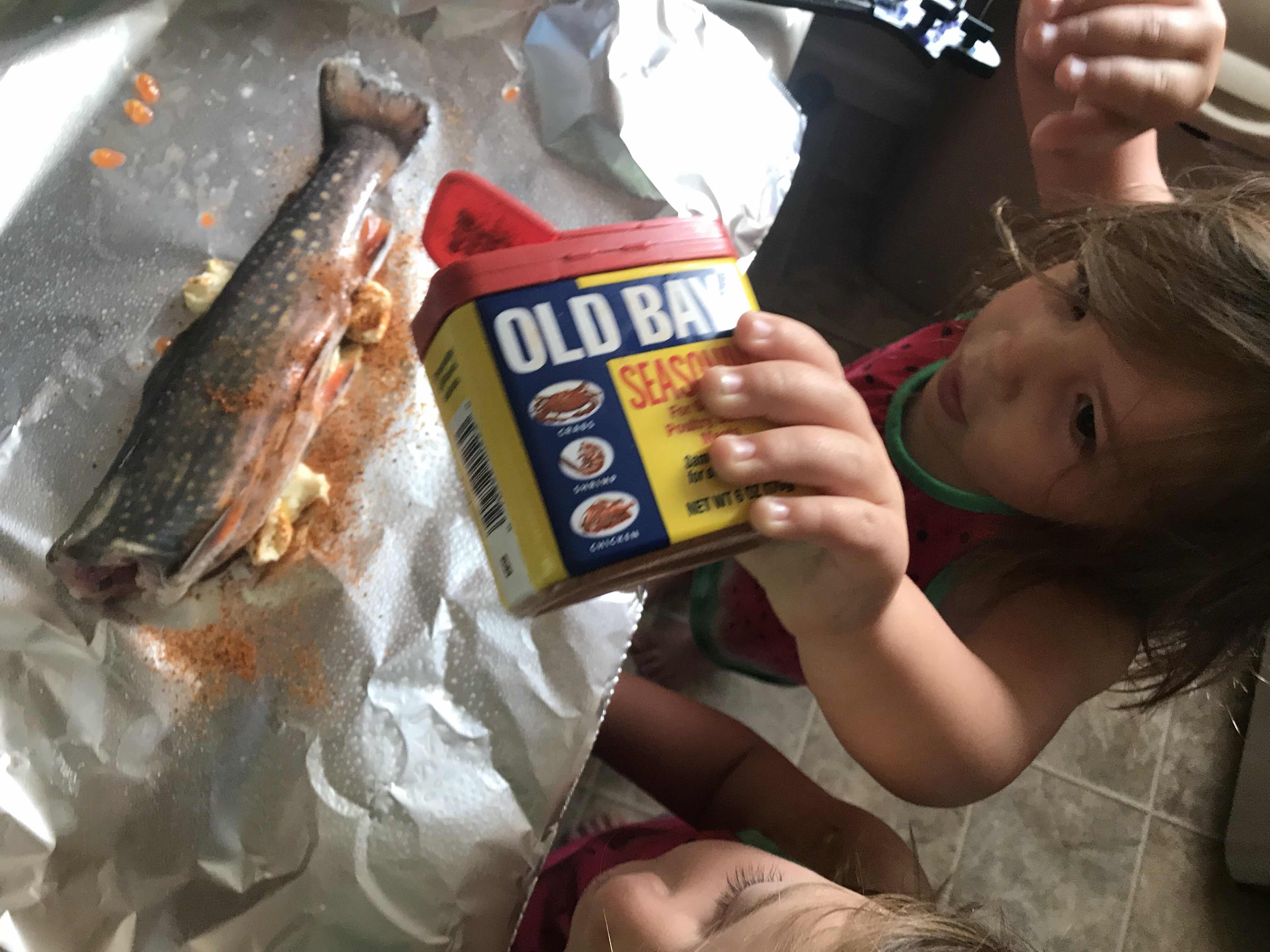 Fold up the aluminum foil into a small packet. The butter and tomatoes will melt and expel juices that will pretty much steam the trout. I’d say roughly 20 minutes on the grill on medium heat will typically do it. I flip them every 5 minutes. After 20 minutes I’ll pull a medium sized trout off and check the meat to see if it’s done. 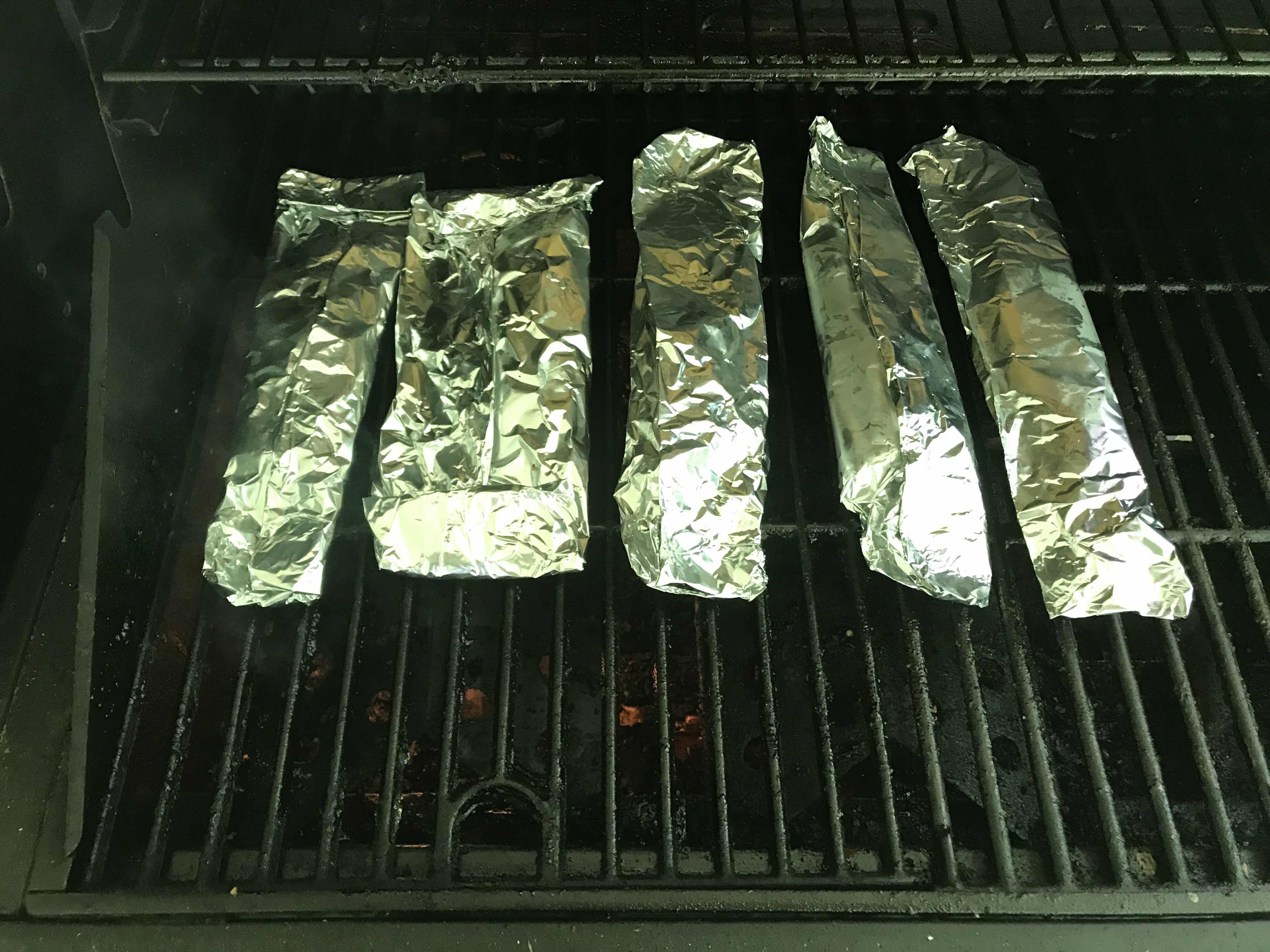 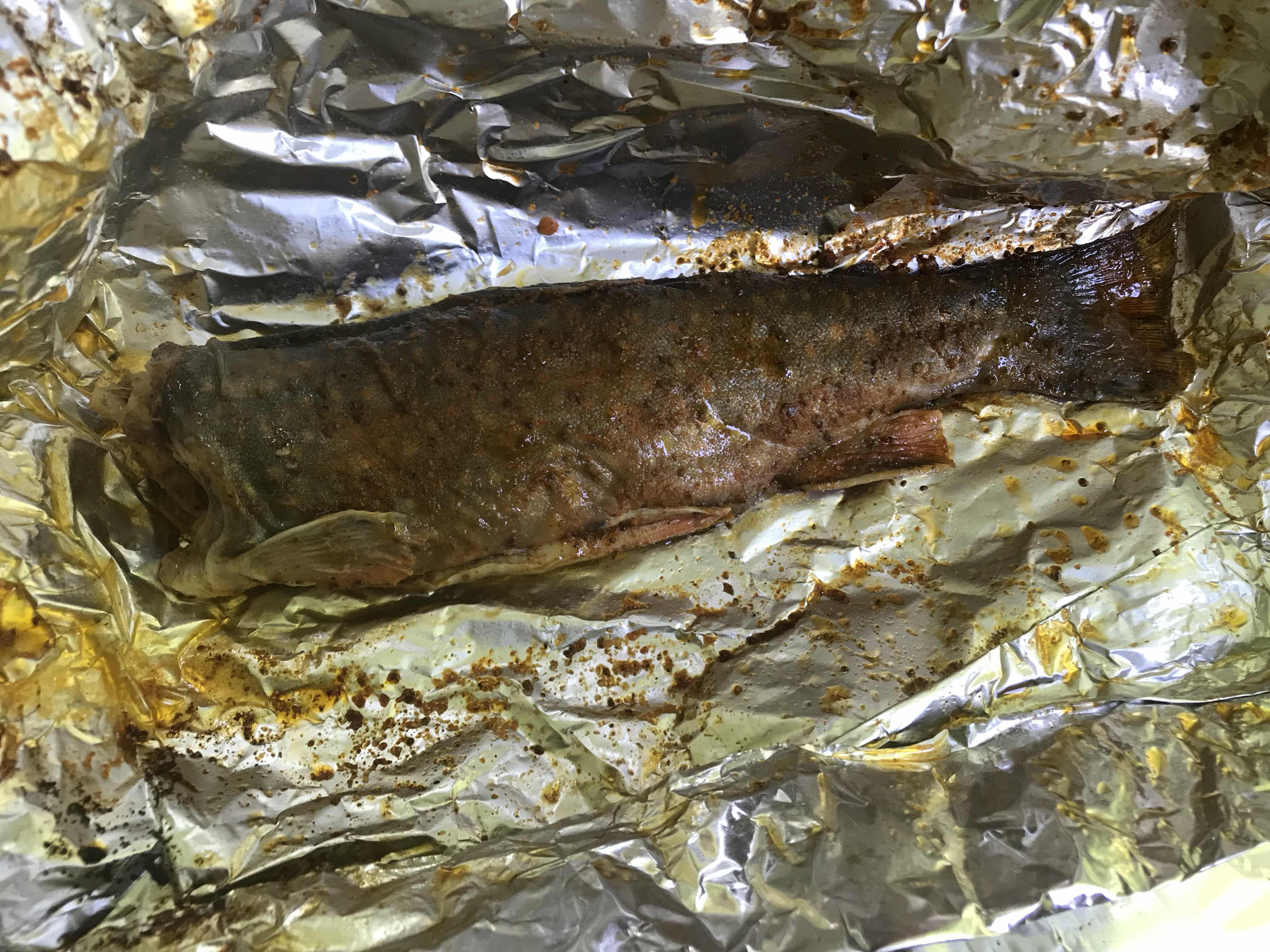 Once I have the meat off I typically pour the butter and old bay seasoning on top of the meat. It’s a great meal and goes well with some steamed broccoli or corn on the cob. 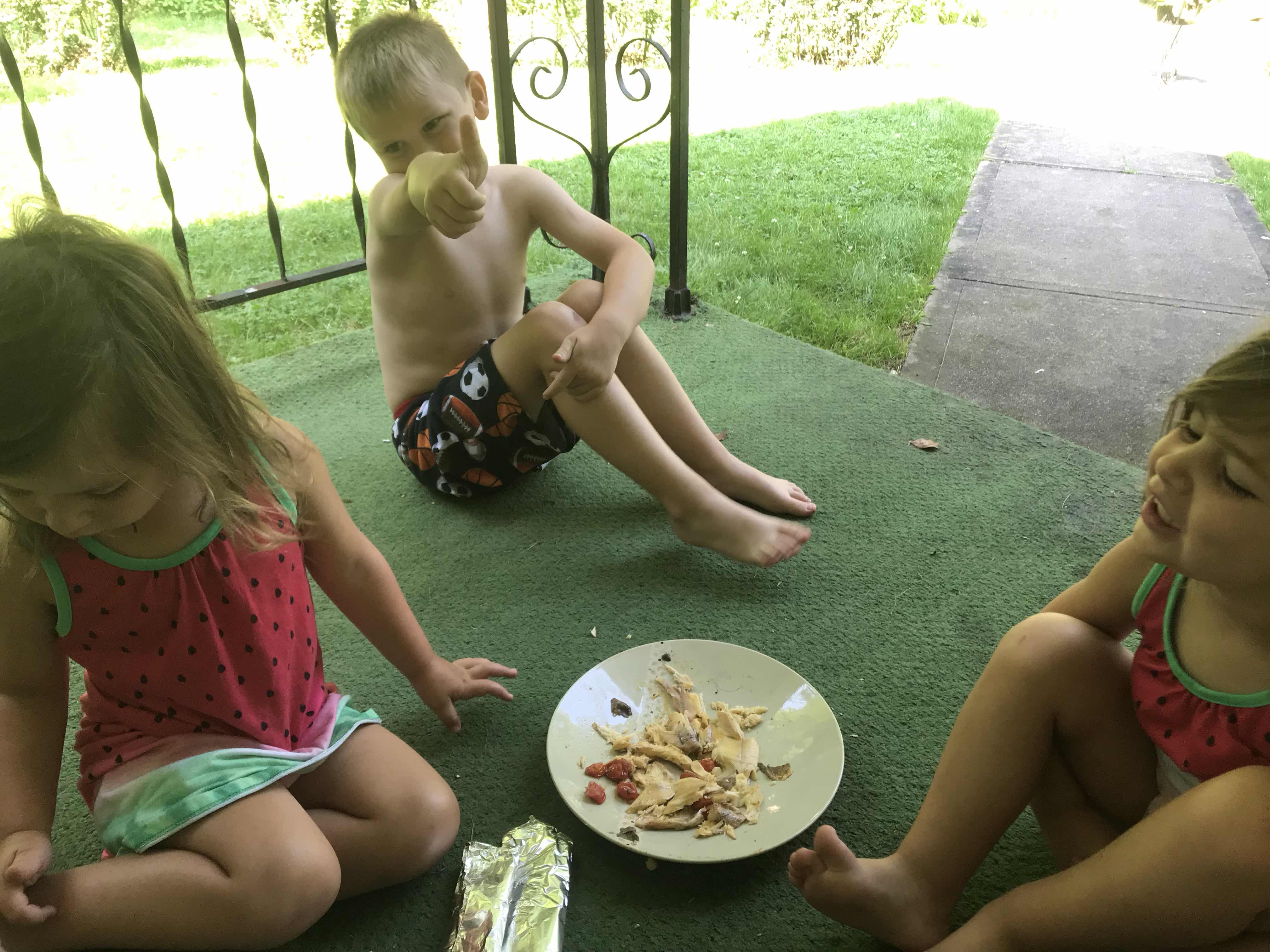